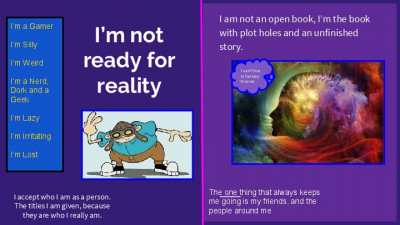 The Slide I made gives an idea about what kind of person I am and associated with. The reason I made the slide the way it is is to grab someone's attention and leave them curious. The slide I made gives people the main idea, but the text adds a bit of curiosity. It gives how I act as a person and why I act these ways, but it gives one big point that just goes untouched. Great advertisements are the ones like movies, they give you a lot of information and a general idea, but there's always more to it. Stuff that's left unsolved that makes you want to see it. In my slide I tried to give that general idea while still focusing of who I am as a person. The way I designed my slide was to have the main attention grabbing statement be the biggest statement and be in a bright color. I also tried to arrange it by rule of threes putting it at the vertex of the top left of the middle quadrant. I also stretched and put my images at the other center vertices drawing attention to them and giving the reader something to look at and piece with the rest of the board. The only things that I wish I could improve upon would be a way for this to be remembered, something to stand out compared to others pieces or designs. The board itself is also to the point where there's to much text on it. If it was simplified keeping only one or at most two parts of the white text then it would be a more simplified board while still hopefully getting my main idea out. The problem with the slide is there is to much going on, If it was the only left half it would be a much better slide and representation with the exception of the text in the bottom left. The left shows the cool style and makes sure my main idea stands out in the biggest font that contrast to the background. The right side is unnecessary and makes the slide look cluttered and unappealing. When I make these projects about myself I regret them and always want to change them, I need to learn to just go through with things.

When I first look at your slide I am very overwhelmed with all the images and the really small text. I feel like there is no theme to the slide and the words are distracting and my eyes don't know what to focus on. The slide though does follow the rule of thirds really well.