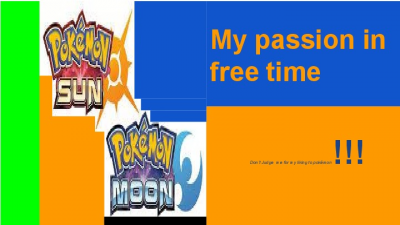 I made the slide like that because I was told it had to be about us so I took an image of what I love to do, playing video games. My reason why I chose the image does not matter and is not what this script is mostly about. The script is mostly about why I chose to design the image as it is. It has a bunch of color because as stated from one of the research pages we were allowed to go to “Color is the very first thing people will notice.” after reading that I took a bunch of text boxes and colored the background. I wrote what the picture means to me in big letters because that was also one of the statements from the research pages to not be a wimp and use big letters. I made below the big letters another line that is very small because I am quiet almost all the time so I wanted it to match me as well but the ! marks are way big so to me it seems I’m screaming my frustration to the world. I didn’t chose an image to “bleed” because if I did it would hide the name of the games and I didn’t want that. We are allowed to only change the slide after we post the scripts and slides on SLATE but I don’t know what to change if given the chance.