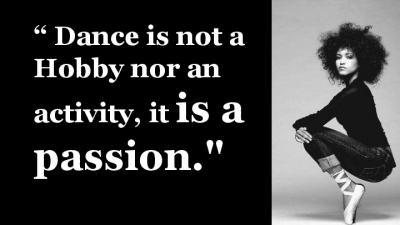 The reason I made my slide look this way is because simplicity is key. Although my slide is very simple it makes a statement. I will first explain to you the picture. I made the picture huge because humans are visual beings as said on Presentation zen vision trumps all the other senses. I didn’t want my slide to only be a visual aid I wanted to make a statement that will be left in someone’s mind. I made the font size on my quote as huge as possible to catch someone’s eye. Although my text is huge I contrasted one part of the text to make it bigger than the rest. Kerning was definitely a difficulty since I used such a big font but since I used few words it all worked out.

What inspired me most was this website I found that’s listed in my sources below. It’s a ted blog and what stuck out was one thing that it said which was find pictures with meaning. The picture I chose has meaning to it. The picture is so strong and it will catch someone’s eye. The rule of the thirds is also another thing that inspired me because I have a lot of empty space in my design and I feel as though that either attracts the person to the text or the picture or even both. Empty space gets your slide noticed and remembered.