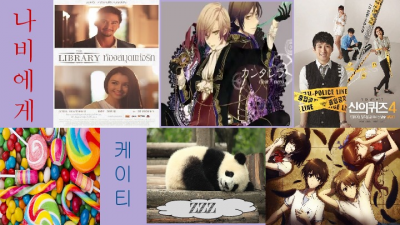 Originally I didn't know what to put in my slide. But then I decided to compose the slide of things I enjoy. I wrote in Hangul(Korean) since I'm currently learning it and thought it would be an interesting touch to my slide. I put pictures of some of my favorites in life. My favorite drama, movie and anime to be exact! I also put in the cover of a song I like from two singers from Nico Nico Douga that I really enjoy, which is Clear and Nero. In my slide there is a picture of candy because I have a big sweet tooth and I normally have candy on me. As for the sleeping panda I placed that picture on my slide since I few people I know like to call me little panda and because I like pandas. Also sleeping... I got influenced to most of the things I enjoy due to my childhood friend, she would always have me watch anime or Asian movies. My cousin also influenced me to watch foreign movies which created a love for that. Growing up he would also be watching French movies and have me join him. This slide is composed of parts that I want people to know about me in a few pictures.