Posted by Deja Harrison in Advanced Art · Hull · e2 Band on Friday, November 4, 2016 at 7:28 pm
This quarter in art we had two major projects. We had to make one of the legendary ceiling tiles and we had to draw a self portrait. I've never seriously been good at art so I thought the class would be a struggle for me. I´ve never seriously been interested in art either but over these last few months everything about that has changed.
The first project was the ceiling tiles. I chose to do something a little complicated but in the end I was proud of it. I did the rap album cover for Lil uzi vert vs the world. I liked the cover, I thought it was very colorful and had a lot of different pictures inside one picture. I thought I could recreate it, make it into my own. I chose to use different colors then the original version. I wanted to make it lighter and brighter. I was so nervous about painting it because of all the colors and it was my first real time painting. I think overall my project came out really well and I'm proud of it.
The second project was my self portrait. This was the hardest of the two to me. I struggled with trying to portray myself correctly. I´m not very good at drawing people especially faces so I was scared of the turnout. It took me awhile to actually get the portrait to look like me. I had to get the detail in my face and my beauty marks it was just extremely difficult. I think it made me realize the class wouldn´t be as easy as I thought it would be.
In all the first quarter projects were a success to me. I never thought I would be in art let alone be good at it. I´m very interested in art now, and I´m very excited for the rest of the year. 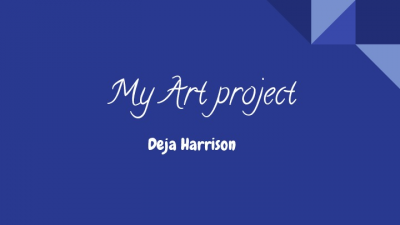