I changed the font to make sure it was legible from far away. I also made the middle part that says my name is, Goldie so it was big and so people focused on it. I made everything come out the middle because when I look at billboard I am not looking at the left side or the right side, I am looking in the middle. When I look in the middle I see the whole billboard and what’s on it. I wanted t make sure everyone would get the feel I do when I look at a billboard and also to think that since everything is not on one side, which makes it nice a bigger. When I made the improvements that the class told me to make, which was make the font bigger, I thought I had to add a little more. I made the font bigger and also made my pictures bigger, so there was an awkward space at the bottom. Over all I think the change is better then the first one  and I am glad I had the chance to fix it. 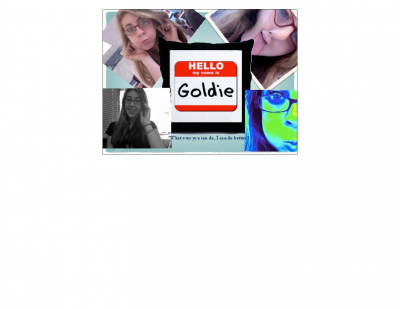