Posted by Nia Hammond in Capstone - Rami - Wed on Friday, May 22, 2015 at 12:44 am
​Throughout the year for my capstone, I chose to explore the world of theatre and performing arts. I saw a few play productions from schools in the Philadelphia area, including Thoroughly Modern Millie performed by students at Lower Merion High School and Pippin performed by Friends Select School students. In addition to this, I read a few plays and decided to try writing my own. With the process that came with first watching theatre productions and then creating my own, I’ve learned that there are many ways to develop a story, put it onto a stage, and ways that the audience will interpret it.
Below is an excerpt from Amazing Grace, a small play I wrote following life of a modern day transgirl (in .pdf form). Enjoy! 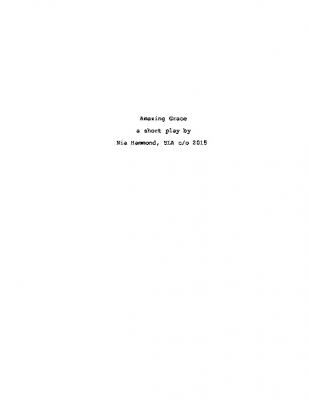 This was one of the first plays I saw after deciding to write one for my capstone. This helped me because it is an example of a school production that I could pull ideas from when trying to complete my own production. Though I didn’t take notes while watching, I was very mentally aware of the elements in the play that I liked (not just the story content, but also the transitions and set) and did not find as pleasing. Something I notice is that this school probably had a lot more time to make the play larger scale than the time I am giving myself, which lets me know that I probably won’t have as long or bulky a play, but that’s okay.

This is another play I saw, which was much different from Pippin. The crew was much larger and the costumes, set, design, and actors were much more available at this school because of its size and funds. I can use this play as another example of how something in writing can come to life. This will also benefit my project because, again, I can take the elements I liked from this performance and didn’t like and have mental notes to help the performance I put on to be what I want it to be. This is especially helpful because the cast is of students.

This source is reliable because I saw it during my Sexuality and Society class with Ms. Giknis. The original writing for this film was in the form of a play, and this is yet another representation of bringing scripts to life. There are different ways to interpret what is on paper and this play had more theatrical elements that made it feel more like a play. For example, there were parts where characters were having hallucinations and instead of clearly making it a daydream-like edit, the film just continued as if nothing happened. Watching Angels in America is another example that gives me ideas of how I can interpret my script into a live performance.

Heaney, Seamus, and Sophocles. The Burial at Thebes: A Version of Sophocles' Antigone. New York: Farrar, Straus and Giroux, 2004. Print.

I read this play during my Political Theory class. Though this play is not as modern as others that I have read, it is still useful because I can note the format of the script and how through only the dialogue of characters (mainly) an entire plot can unfold. The best way to learn how to write plays is to read and see many plays, so that is what I am doing. I selected this source, and it was the first play I read after deciding to write a play. The formats used in this play will be useful when I am writing for myself.

This is the podcast that inspired me to write a play. Not only did it inspire me, but I am creating my plot based on the people interviewed and featured in this podcast. There are two young people who were born as males but identify as girls. They are from different states, and have met through a convention for parents of children like them. Lilly and Thomasina speak first-hand what they feel like being “out of the ordinary,” which I can use to guide character development in my play. Though the lives of these girls will be later on when displayed for the play, this podcast is important because it is my starting point, essentially.

This web page provides many tips for writing narrative pieces. The author of the blog on which this page is posted recently started the blog in 2013 and frequently updates it with more tips. Just a few months ago, she was involved in an online writing retreat. Because I am not used to writing large amounts or writing narrative pieces, I turned to this source. With it, I can begin to draft out more knowingly what my play will be like. That way, I don’t have a confusing plot with the tips used from this post. I can plan out the script and have it succeed.

I read this book for Sexuality and Society class. I chose to read it because not only does it deal with a controversial topic, but is a play. The good part about this play is that it has also been performed and I can find versions of adaptations for this performance to see how I could like my play to carry out as well. This is a good source also because I can use the format of the writing and the plots to mimic when writing my own play. Again, this just adds towards my research process for widening my knowledge on plays and how they are performed and written.

These are tips I really needed in addition to other resources that explained the ropes of playwriting to me. This article was written on the Guardian, which is a reliable source for news and other topics. From this source, I learned that I have to learn to listen to what’s going on around me and be very wary of those conversations. It helps to write things with a more realistic approach. For example, if you listen to conversations on the train, you can build a story off of the partial story you are getting from what you hear. Also, another tip was to write more often, which I have been doing since discovering this source.

This is another display of many useful tips I need to keep in mind during the writing process. The most useful tips I picked up on was to write about what I’m interested in and what I could learn more about, which would be a driving force for the plot. Another tip was to start out with a plan, and to avoid being boring. By many writers’ perspectives from the video, boring is presenting the audience with something they already know. Additionally, it was good to know that the first draft of a play is not always going to be the greatest, and being able to take criticism is crucial or else I might not succeed.

Some of the tips here overlap with things I already had an idea about, but nonetheless, they were still useful. Something that I found to stand out was the tip that said to focus on character development and less about the more theatrical things. The main character should have some change, journey, what it may be between the beginning and end of the play. Also, it was said that I only need to write what is necessary in terms of stage directions and gestures for characters. This source is reliable because it comes from Writer’s Digest, which is an publication for the community of writers.