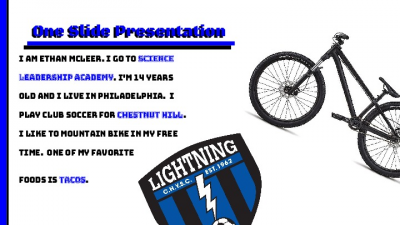 I made my slide look very interesting. I added in only a few colors which I think tied the slides together. I also added in pictures to correspond to what I was talking about. One thing that influenced my choice of color schemes and picture placement was what I learned in tech class. The videos that I watched and the blogs that I read helped influence my decision to make my slide. One of the things that I used was the bleeding technique. That is where you make an image look as if it is running off of the slide. Another technique I used was color scale. I have colors that look well next to each other included in my slide.