PAWS … That is Not Right!

Many people think that animal abuse is just when an animal gets harmed by a human, then person gets charged and everything is fine. Well, that is not how things are. Animal abuse is way more detailed than a person just harming your pet. Therefore, throughout this project I will be informing the public that animal abuse is a way bigger issue than our community views it. I am interested and prefer to use this topic than any other one because I have a lot of history with animals that were abuse and simply to educate the public. Furthermore, I see animals as living creature, humans are living creatures, in the end I view most animals the way I view strangers. I am also interested because lately overheard people talking about a dog getting brutally abused by it owners and the person talking did not know what to do at all. 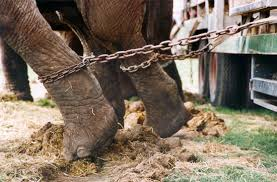 This picture is a picture of a circus elephant get chained up tightly and forced to stand against its will.

Now lets get to the bigger and more general picture. If you never heard of animal abuse or just simply do not know what it is it is when an animal gets harmed, gets neglected, and does not care for an animal responsibly by a person. For instance, a if person was cruel and took their anger out on their own pet that would still be illegal and inhumane. Also, To hurt or to be cruel to an animal would be against the law no matter what.

This shows how big of a difference between the dogs life when it was neglected and saved. Notice how grateful and happy he or she looks!

This the significance of the public being aware of the issue is really serious.The issue of animal abuse does not only have negative impact on animals but it does a negative effect on humans. When someone abuses an animal  they may be an more likely to cause violence. Also, if a child witnesses animal abuse they are at greater risk of becoming abusers themselves!  Moving on, if you think that think that animals were only abuse in the ways I you obviously never heard of the brutal acts of factory farming. When you buy food products from an animal such eggs,milk, and meats 99% of the time they are from factory farms. Factory farms are focused on getting money, what is easier, spending the least amount of money at the price of the animals’ life because they are heartless and greedy. For example, they genetically alter animals’ bodies so they can grow extra limbs. Another example is that  some animals for meat are chained up inside so they can never see the sunlight and there bones are so weak the literally can’t stand up. In the end, I just want to put out there that animals abuse is so much more to me and this is only the beginning. 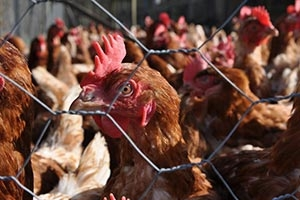 This images show how bad factory farms are because they keep multiple animals is a little lot.

As I am wrapping this up I am still thinking a lot.  Would people still look at animal abuse as a useless topic to push away and forget about or would they look as it really informed and serious now. For example, would a person who thought the world had bigger problems now look at animal abuse as a serious issue that we need to fix. I am hoping that I could talk more about the topic because I know so much more types of animal abuses such as animal testing, puppy mills, slaughterhouses, circuses and so much more.

I completely agree with what Jamal says here. Animals are living creatures just like humans. They deserve respect. I am disgusted and enraged by the references to animal abuse in this post. For example, "This picture is a picture of a circus elephant get chained up tightly and forced to stand against its will." This is absolutely terrible and sickening! They should care for their animal and give it the honor it deserves. Another part that stands out to me are Factory Farms. "… they genetically alter animals’ bodies so they can grow extra limbs."! Again, this is terrible. Harming others just to gain something for yourself is despicable. This reminds me of dog and cock fighting. Many organized dog fights still take place all over the country, even though it is outlawed in all 50 states. There are even different types of dogfighting, "Street", "Hobbyist", and "Professional". Cockfighting is forcing roosters to fight against each other. Some have weapons strapped to their legs and illegal gambling and drugs occur on the side lines. I am looking forward to learning what you are going to take action against animal abuse.