For this project in technology class, my classmates and I had to design a slide all about us. With that slide we had to use methods of making a slide the best as possible as we had learned in previous lessons. That meant leaving some space, writing in large font, make it colorful and to use bleeding to make the slide strong. Using these methods I came up with this slide to represent me.

This presentation shows a example of glance media. There is one picture of the United Nations and my name. By there a reader would automatically understand my message with just one glimpse.  There are only two words on the slide, “Gabrielle” and “Kreidie”, my name. This allows the reader to not have to read through a whole lot of words, only stare at the picture. The reader automatically gets the picture/idea. I was not being a wimp throughout this slide, I made things big. I made the slide colorful and I made the picture turned a bit showing a more flow in the wind of the flag. I allowed the picture to be bled, one did not have to see the entire pole from which the flag was flying across. There was some clear space around the flag not allowing the flag to take up the whole slide. This presentation, as I said earlier, shows the reader the ultimate message: I, Gabrielle Kreidie, have a admiration and love for the United Nations. 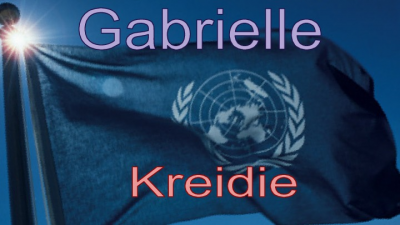 After receiving constructive criticism from my peers, I designed a slide that was more inspiring to the eye. I took away the shinning light behind the United Nations flag, as well as, removed the flag all together. I decided to push a more classy and complete, straight to the point slide. The slide is the three top chairs at the United Nations General Assembly where the Secretary General, President and Under Secretary General of the United Nations sit. This showed the viewer that I want to be in one of those chairs in the future. The slide was brighter showing optimism with the hope to accomplish that goal.
Ms. Hull set me up to fail by giving me very little directions. She allowed us to be in charge of our slide, she allowed us to take complete control, which turned out to be a great decision on her part. We started off not getting the whole idea of making a slide magnificently beautiful in the design area. After viewing our peers' slides, it became clear to how to make a well and poor designed presentation slide. Thank you Miss Hull, for allowing me to improve my strength in designing slides. 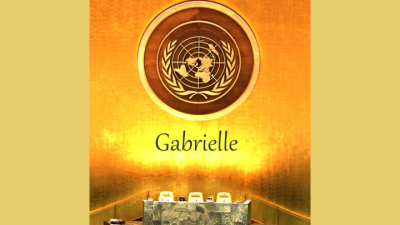