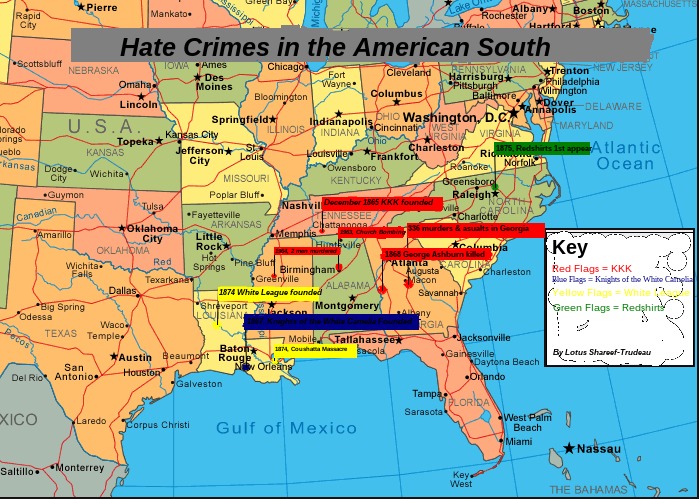 The Reconstruction Era was the period of time after the Civil War it was a time of recovery and transformation in America. During the Reconstruction former slaves gained several rights and were on their way to becoming equal with the dominant white race. With the rise of black empowerment came the rise of many hate groups. Groups like the  Klu Klux Klan and the White League. Groups that spread used violence and intimidation to get what they wanted. These Hate groups terrorized cities with ravaging fires. Harming people of color and any of their supporters. Reconstruction ended with the assassination of Lincoln, and the people of colors lost most of the rights that they had only just been granted and were forced to regain them through years and years of civil rights movements, but many of the hate groups still survive today and even saying the names of them has become a kind of taboo. My map is meaningful to the study of the Reconstruction era because there were so many attacks on innocent people and my map is an easy way to see just how many reports of violence there were in the years of reconstruction. One thing that may not be very clear at first glance is that each of the flags on the map is a reported attack or the formation of a new group. Another thing about my map is that not every point on the map is super accurate, espescially since they cover a larger amount of space, so that is one thing you might want to keep in mind.

Thanks for this helpful map. Although your description could have worded a little better, it was still informative. I just looked up who the Red Shirts were, and they sound utterly terrifying and it's almost impossible to believe that they existed at one time in North Carolina. It's also rather interesting (and horrifying) to see where these hate groups were congregating.

I really like how you design and made the map, but for me, the red lines are confusing.

I really like how you design and made the map, but for me, the red lines are confusing.