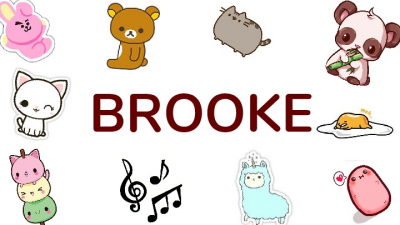 ​When I made my first slide, there were a lot of mistakes. I realized myself that the picture I had was low quality and that it needed to be changed. My slide wasn't eye catching nor was it clean. I was told to make my slide look like an actual sticker book instead of just a little bit. I learned that when everything is on the same level it confuses the audience and bleeding is okay.
When I was changing my slide I removed the picture, since it was low quality. I decided to add more stickers so it could actually look like a sticker book. I also didn't make them on the same level or really far apart. I made them go around my name. I was told to not put my name on it. I thought that I should make my slide look like a cover of a book about me. I decided to keep my name but change the font, size, and color so it can catch the audiences attention ( I even tested it out with a few people ).
The research that I did helped me a lot. It made me realize that plain and simple isn't the answer at all. I should always try to make something catch the audiences attention. When I did more research they talked about the font for letters. They said do something big, which is what I did. I did bleeding for my first slide but decided not to. Bleeding can make my slide look better though. It just didn't go with any of the pictures that I had. The first time I made my slide I tried to have a balance space but it didn't look good with all of the empty space. The research I did, did teach me to have a visual theme. Having a visual theme helped me get an idea of what I want to do. The sources that I used were all very useful websites. For example there was Presentation Zen, Slide Design Link, and Elements of Design Defines.