My name is Dillon Hershey and this is my slide. This project is to create a slide all about me but you could only use ONE slide. Then we have to present about the slide and why we made the slide like we did. I wanted the slide to not be overwhelming or underwhelming so I just used my name and my a picture. In the picture I have words that describe me and what I like. I asked all of my friends if they could describe me in one word what would they say. When I first got the project description I thought that I should make a collage of pictures of me and what I like but after I reviewed Presentation Zen I didn’t want the slide to be too crowded. So instead I created a Tagxedo which uses words to create a picture. The words that I used are things that I like and words that people have used to describe me. I chose a plain background to keep it simple and the color of my font matches the border of the picture. In this project I learned about the rule of thirds, the term bleeding, and a lot about presenting the slide. The term bleeding means that you put the picture off the screen to make the picture more eye-catching. The rule of thirds is when you put the object of focus in one of the thirds, the left hand side, the middle and the right hand side.

When presenting the slide you should not read off the slide at all. I hope that you enjoyed my slide and learned a lot, like me!

New Slide
I chose to put the name on the side because I could make the name one third and the heart the other two thirds. Also it makes the reader have to think a little bit and turn their head sideways. Also I wanted to have the name match the heart but if I just chose one color it made the other colors seem inferior. So I made all the letters a different color from the heart. I thought about changing the font of the name but any of the other fonts didn’t look right with heart. I took the border off the heart and made the heart bigger so you could see the words. 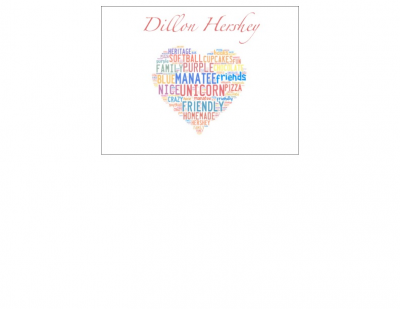 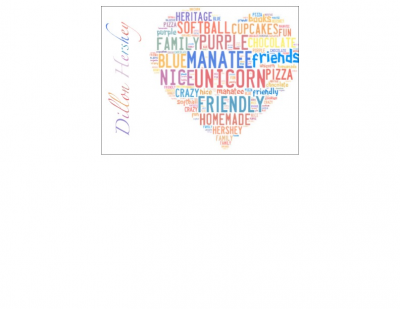 I noticed you slide is nice and simple. The one picture in the middle gives it color, shape and sizes. The font of your name makes the slide fun but slightly sophisticated. Over all this slide is well done. -GOOD JOB-