A lot has happened since I first looked into this issue.

Back when I was writing my first blog post for my You and The World issue, I was listing a lot of other statistics on general teen sleep. I have mentioned how other disorders (such as depression and anxiety) could lead to insomnia. I have also written about sleep apnea and its own causes (such as obesity) and its cures. I’ve been considering my plan of original research as I was writing it.

I put that plan into action soon before I wrote my second blog post. I summarized the survey and how that plan didn’t work out (questions were more about sleep than disorders), and what four people said when I interviewed each of them (Three had insomnia, one had sleep apnea; that’s the plan that did work out). Those four interviews have let me know more of what it’s like to actually have one of the two disorders. At the very end of my second post, while considering a second plan, I said : “Whatever I think of in this moment, I’m probably going to change my mind later”. I was right about that.

When I first glanced at this part of the project, I considered raising money to push towards medicine for insomnia and sleep apnea (and contacting Penn Sleep Medicine first), But realization came across. Only doctors can prescribe medicine. It didn’t take me too long to think of a different idea. Recent data suggests that these sleep disorders are gradually starting to get recognized, and a lot of Sleep Clinics are still studying the brain. I can’t create medicine on my own, but I wanted to at least help spread the word.

I have created a website called SleepWell! It’s meant to raise awareness for medication for insomnia, sleep apnea and many more. I felt that it would be easy for people to see and view a website (once I promote it well enough through via advertisements around the school) since people are on the internet all the time. The website summarizes what needs to be known about insomnia, sleep apnea, and a few more common sleep disorders, with statistics and symptoms found from a variety of Sleep Meds and other trustable sources.

It starts out with an introduction page, which introduces both me as an SLA student and the Y&TW issue I’m working on. It also summarizes my first two posts on this issue. The four paragraphs are meant to give people a backstory on who I am and what I’m doing. The “backstory” includes links to my first two posts and bibliography. There’s also a list of things you’ll find in the website found towards the left. It’s to give a small preview of what there is to see.

Insomnia and Sleep apnea have their own two pages on the website. Those are two common disorders I’ve been focusing on throughout the entire project. Insomnia is more prevalent in teenagers, and sleep apnea is prevalent in both teenagers and adults. Both of those pages have a description, list of causes, its symptoms, the statistics, and treatment. The treatment for insomnia lists Melatonin (a medicine), therapy, chamomile, and passionflower (both are tea). The treatments I have written about for sleep apnea are a CPAP machine, surgery, and physical exercise. A few quotes have been taken from WebMd, a vitamin/supplement center,  to describe the treatments. I wanted to make the treatment category the biggest one, so people who look through this website can easily find out what to do/how to treat it.

“Insomnia and Sleep apnea may be two of the most common sleep disorders, but they are surely not the only two on the list. Some of the following sleep disorders are rare, but are possible for people of various ages to get.” -SleepWell, my own website. 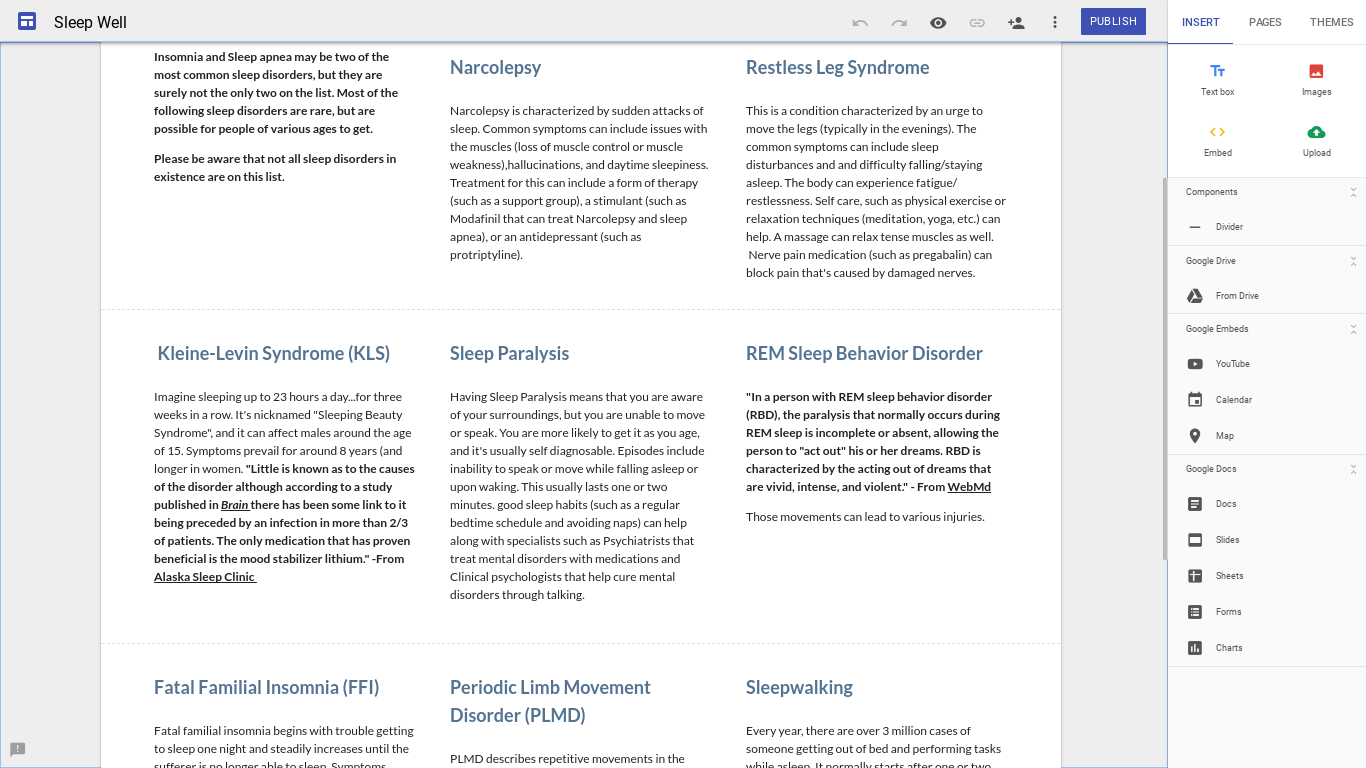 This is a whole nother page with descriptions on eight other sleep disorders. Those eight include:

I have also taken quotes from Alaska Sleep Clinic and Sleep Med of Santa Barbara, since they are both professionals that know a lot about most of those disorders. For every one of those disorders, there is a description that comes with treatment/cures (if any). If i didn’t create this one page, this website wouldn’t have been as helpful. Writing only about insomnia and sleep apnea seems more like an article with its own URL than a whole new website.

Since the website was finalized on Wednesday, May 16th, I’ve been working on ways to publicize it. Venngage lets me create flyers, print them out, and publish them to another world on the internet, so I’m sure I’ll be using that to get the word out. People also have suggested for me to advertise it on medical forums, and I am currently looking for some good ones.

It took me nearly a month to work on this website, and I’m still not done the project. If anything could have been done better, it would be time management, and that way I could have added things such as more visuals for the eight other sleep disorders (diagrams, pie charts, etc.), or I could have worked more on what the advertisement looks like and says.  I honestly don’t think that the job is complete until everyone is able to see what I’ve done, and I know I haven’t reached that point yet. There is still much left to do, and I’m willing to continue.

My annotated bibliography is right here.