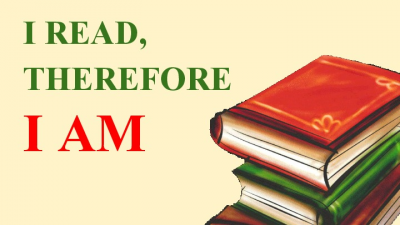 I found a picture with a stack of books and made it big so that it would catch your eye but no so much so that it would take up the entire slide. I positioned the stack so that it bled a little of the slide. For the words I noticed that the picture already kind of had a color scheme and used the colors in the picture for my font. I used the same size font and color for the first two lines of text but I wanted the last line to stand out so I increased the font size and changed the color. I made the background a kind of neutral that I found in the image I used. I tried to position everything following the rule of thirds and leave an attractive amount of negative space on the slide.