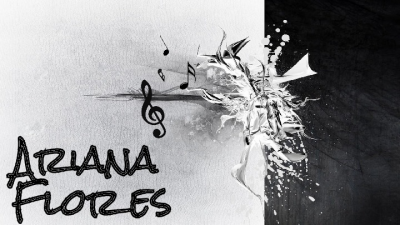 ​From my critiques, I got the impression that contrast didn't always have to be included on a slide. There were mixed feelings on whether I should include contrast and stray from my color scheme. I tried to add red and different colored paint splatters to blend in with the black and white on the second and third-third of my slide. However, it didn't seem cohesive. From there, I wanted to keep the font (Rock Salt) and size (64) because it was said that the tension between the "A" and the treble clef was apparent and worked well.

I didn't want to change the black lettering to one specific color, because the color seemed too vibrant against the backdrop. Then I tried typing the same text in a separate text box and stacking it over the black. From there I changed the color of the text on top to create a black shadow behind it. I applied colors such as white, red, turquoise, navy blue, etc. Although the color shadow added dimension, it didn't hurt or improve the slide. I ended up just keeping the letters plain black. I also spaced the letters “r” and “e” in “Flores” so that they weren’t confusing to the eye. It may seem a bit spaced out, but I wanted to make sure that it was easy to read without having to change the font.