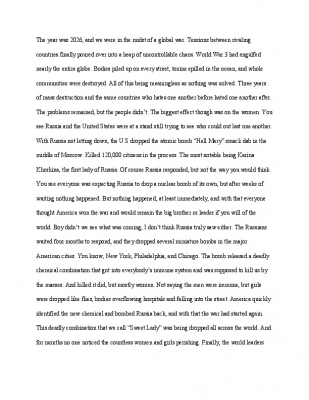 The idea was very creative and interesting. This struck me as more future fantasy than anything else. I'm just wondering how the population of the world, which will be less than 8.5 billion by the time the story starts according to population projections, would decrease by 7 billion by the technology introduced in the story. In order to decrease by that much with the bomb that killed 120,000 people, you'd need around 58k of them. That's… a lot, and the US and Russia make a small enough percentage of the world population together to make me wonder what was happening in other countries. Since it killed off 7 billion of the 8,5 billion people projected to be living by 2030, there's just… so much.

I found your story very interesting. Although, I do recommend some details to the plot because it was pretty confusing.

A curious proposition. Could use some paragraph breaks.

The story had a really good direction to it, and a creative idea I haven't heard before. I'm wondering how much farther you could take this story, really. It sounds like a good start to something much bigger than itself in the current state.