Posted by Alaina Silverman in English 1 - Dunn on Tuesday, May 29, 2012 at 9:56 am
​In my first and second posts I wrote about robots and cyborgs. What's next, a Terminator-esque apocalypse?

Fear not, I will not indulge in such tomfoolery. Instead I think some survey results are in order (I wouldn't be a proper Martian dictator if I didn't follow up).


A total of 39 people participated.
I find these results very interesting. The majority of the survey takers feel that they are very familiar with technology; another landslide majority are not comfortable with humanoid robots as an integral part of life.
At the same time, nearly half of the group have thought about or want robotic parts as a component of their own bodies.
And everyone, save for two, have used some sort of modern appliance.
​This makes me think that the general populace (of 30-ish people, no doubt), though comfortable and practiced with technology, isn't ready for full on robot-human interaction. That would include teaching, discussing theories, and engaging in relationships... so it's great that my survey group mostly isn't ready for that. However, their aversion isn't going to stop the production of such machinery and it is highly possible that people could just unconsciously get used to it.
Though that may not seem like a glaring problem, it is never a good thing when people fall into a rhythm without knowing what it is they are getting in to. To help remedy this I made a short video that will hopefully pique the publics interest and inspire them to find out more about technology that is still in development. 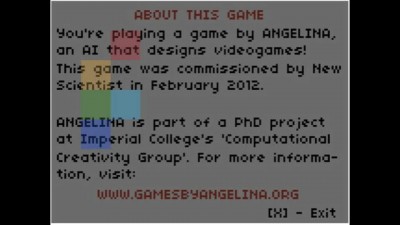 The first picture is the intro text to the games made by an artificial intelligence named Angelina. 'She' factors in playability and creates the sprites, background, and gameplay without outside input. The following montage of pictures shows robots in the media and the real world. The last, and perhaps the most profound, is the 50's ad spoof for about a violent house bot.

This video will be spread through Youtube, this blog post, and several social networking sites in an effort to have people become interested.
The evolution of robotics and programming is not a bad thing. Despite this, there are plenty of regulations that humans as a whole should hammer out. The definition of a person, for one, and how that applies to artificial intelligence. It would be a terrible thing if we created these amazing thinking beings but end up oppressing them.

As a bonus for scrolling down this far, this is a conversation between me and Cleverbot. Can you identify the Bot?