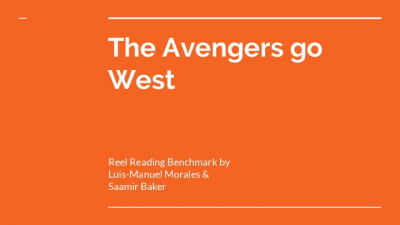 The scene we decided to transform was the “Impenetrable Shield” scene from Marvel's The Avengers (2012) It Provided the perfect setup that could translate well into a Western Movie Scene. It has a mexican standoff between the villain (Loki) and the protagonist (Tony Stark) where Loki has a weapon that is a danger to Tony. For our scene we transformed the environment into a Wild West town, the characters into cowboy versions of themselves, and Loki’s Scepter into a magical shotgun.

Our scene opens up with a long shot of the characters in a staredown, smack dab in the middle of a dry, saturated environment. The ground is sand, the sky is orange and black and all the building use hot colors to demonstrate the warmth of the environment.

The second shot is a eye level close up shot of our villain, with the orange sky behind him to keep the dry theme going.  Loki's outfit is a western take on his Asgardian robe from the film. Rather than a low shot looking up at the characters like the original film, we followed the Western trope and brought the camera to his face, showing his emotion clearly.

The third shot cuts to Tony’s face, in the same eye level close us style as the previous shot. Tony is wearing a western inspired poncho with the colors of his Iron Man armor. His facial expressions express the cockiness of his character that he carries with him in all his interactions.

As their staredown continues, our fourth shot is from over the shoulder of Tony. He looks as Loki approaches him with the Scepter. The colors continue to be dry and saturated as a tumbleweed is blowing past in the distance.

A typical western includes a drunk protagonist. Tony is just that, opting to threaten his opponent while he takes a sip of some alcohol. This over the shoulder shot looking at Tony taking a big gulp of his beverage demonstrate that he is a laid back yet gutsy and reckless hero that relates more to the audience that a know it all, all righteous hero.

As a typical western would have, the “draw your weapon” scene. The sixth shot is a medium long shot of Loki in action, drawing his scepter at Tony. The town building is in the background to keep the audience in the town to keep the environment small but sufficient in this scene. Similar to how the movie takes place with New York in the background but inside of Tony’s penthouse.

The seventh shot is an extreme close up of Loki’s scepter failing to fire. In an intense moment the misfire is a relief to both the protagonist and the audience.

The final frame medium shot of the scene shows Tony looking down at the Scepter pointed at his chest. His attitude provies humor in a time of chaos and concern, making the protagonist even more of a crowd favorite, and lightening the mood of the intensity.

The existing content the movie provided some pre existing western movie tropes. Taking those and going full on western creates a new take on the genre that we are proud to show off.