While reading Born a Crime by Trevor Noah, I was inspired by the way he had turned an interesting but seemingly unimportant story into something super meaningful. He could do this with what seemed like any type of story, no matter how funny or how stupid it sounded, which I think is a real talent that I take a lot of inspiration from. I decided to write about a personal Struggle I had that could also apply to a lot of other people based off of how Trevor does about his personal struggles. For example when he says “I floated. I was a chameleon, still, a cultural chameleon. I learned how to blend” (Noah 79). Here he is referring to how he was struggling with something some people might relate to, but he didn’t know of anyone who did, and this also shows what his solution to coping with his feeling of difference was. I took this into as much consideration as I could, so I tried to come up with a way to show how I attempted to come up with a solution although I haven’t really come up with a solid one yet. Another thing I tried to take into account when writing was writing impactful sentences or phrases in my memoir. Like when Trevor talks about his mom saying “I was a product of her search for belonging, she never felt like she belonged anywhere” (Noah 48). I thought this quote was a really good one liner that impacted me because I think that trying to find a place to belong to or feel like you belong to is universal, but also a personal struggle for everyone because the place will be different for everyone. I initially wanted to incorporate his humor into my story, but I had decided not to because I wouldn’t know where to incorporate it in, but I aspire to be able to explain real, and deep stories like him in a way where it’s actually intriguing and less lecture-esque. But mainly I just wanted to incorporate my interpretation of how deep he dove into a single story that he was passionate about, but for a different topic closer to me. I realized that this was a lot harder than I had thought, but I think I have done a pretty good job at getting what I had wanted to say out pretty clearly. 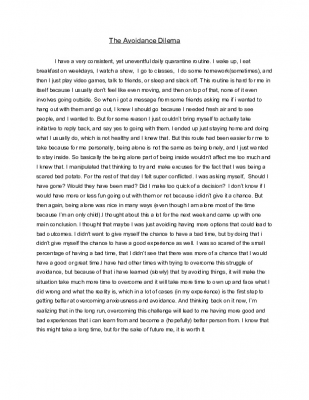 This can probably resonate with a lot of people—and that one part about being alone not necessarily meaning you're lonely— & I know I kind of can relate to the routine ;-;