The two pieces I decided to cross-analyze were Shakespeare’s Taming of the Shrew and Anna Fletchers The Proposal. In Shakespeare's Taming of the Shrew he shows the progression of a forced love, the two main characters Petruchio and Katherine despise each other and go through with a marriage based on outside issues pushing them to go through with it. In Anna Fletchers The Proposal we too are presented with two characters, Margaret and Andrew, that are forced into an engagement and are relying on the promises they gave one another other in order to continue with this fake engagement.

In Shakespeare's play, our two main characters are pushed into their marriage by outside forces, Petruchio wants money and Katherine craves her father's love and acceptance. The fastest way for these characters to obtain their desires is through a sham marriage. In The Proposal their engagement is forced by the female lead, Margaret, she needed our other main character, Andrew to keep the lie, that they are engaged, going in order to keep her job. The only thing that kept Andrew in the deal was a raise and a publishing deal that he made Margaret give to him in exchange for keeping the lie. In both pieces, it is argued that because of the hardships that both parties face while being forced to “love” each other, forced loves are the strongest loves in the end.

The first scene I chose to include from Shakespeare's piece was one of Katherine and Petruchio's first encounters.

Katherine: If I be waspish, best beware my sting.

Petruchio: My remedy is then to pluck it out.

Katherine: Ay, if the fool could find where it lies.

Petruchio: Who knows not where a wasp does wear his sting? In his tail.

Katherine: In his tongue.

Katherine: Yours, if you talk of tales, and so farewell.

Petruchio: What, with my tongue in your tail?

Towards the beginning of Taming of the Shrew, Kate and Petruchio's very first interactions were noticeably passive and slightly flirty. Petruchio is the one to initiate the flirting and eventually declares it his mission to have Kates hand in marriage. There was no sign of love, in the beginning, both characters could barely stand each other but their dynamic was already very flirty considering the circumstances.

This same setup and dynamic is seen with Margaret and Andrew towards the middle of The Proposal.

Margaret Tate: If you touch my ass one more time I will cut your balls off in your sleep, okay?

Margaret and Andrew had been staying in Andrews’ parent's house for his grandmother’s birthday. His family was under the impression that they were together so when the “couple” had been noticeably distant Andrew takes it upon himself to bring Margaret in for a hug followed by a little pat on her bottom to assure his mother and grandmother, that had been watching their little conversation from the window, that they were still a happy couple.

Since Margaret was Andrew's boss and he disliked her immensely at times he took this as a great opportunity to be in charge, he knew she couldn't openly oppose him in front of his parents or their plan would fail. Even though that was the case Margaret still established her place in their power dynamic but threatening him the way she did and giving him a loving little slap on the side of his face. Watching their relationship shit throughout the movie definitely proved that what they had to go through changed them for the better and brought them together.

In the following scene, Petruchio and Katherine are preparing themselves for company and need to put on their best married couple attitudes. Petruchio makes a point that the moon is shining brightly at the moment. Katherine quite confused points out the fact that it is indeed morning and it is the sun that is shining so bright.

PETRUCHIO: Come on, I' God’s name, once more toward our father’s.

Good Lord, how bright and goodly shines the moon!

KATHERINE: The moon? The sun! It is not moonlight now.

PETRUCHIO: I say it is the moon that shines so bright.

KATHERINE: I know it is the sun that shines so bright.

HORTENSIO: (to KATHERINE) Say as he says, or we shall never go.

KATHERINE: Forward, I pray, since we have come so far, And be it moon, or sun, or what you please. An if you please to call it a rush candle, Henceforth I vow it shall be so for me.

PETRUCHIO: I say it is the moon.

KATHERINE: I know it is the moon.

PETRUCHIO: Nay, then you lie. It is the blessèd sun

KATHERINE: Then God be blessed, it is the blessèd sun. But sun it is not, when you say it is not, And the moon changes even as your mind. What you will have it named, even that it is, And so it shall be so for Katherine.

At this point in the play, Katherine and Petruchio know enough about each other to predict one another's behavior and recognize their traits. Katherine who is normally up for a fight when it comes to Petruchio's actions and profound comments does something out f character.

When the time for Katherine to fight back in her and Petruchio's argument another character named Hortensio points something out. He states that they would never leave if she didn't just agree with him, and it clicks for her. Katherine finally recognizes the pattern between the two of them and decides to do something out of character, she gives in. Even though Katherine has never been one to give up a fight she realizes that if she is to keep up this so-called loved in their sham of a marriage Petruchio has to be happy, which also means he has to be right.

A similar sacrifice is shown in a popular scene of The Proposal. Margaret and Andrew have just left their place of work after lying about their engagement in order to keep Margaret's job. Margaret explains the plan and how she wants everything to happen and Andrew reluctantly agrees. Andrew with a serious look on his face asks for his proposal and Margaret baffled declines seeing the action as demeaning, Andrew begins to call off the deal but Margaret stops him. Knowing that Andrew would leave if she didn’t do this action in the middle of the street to please his ego she gets down and proposes.

Andrew Paxton: We'll tell my family about our engagement when I want and how I want. Now, ask me nicely.

Margaret Tate: Ask you nicely what?

Andrew Paxton: Ask me nicely to marry you... Margaret.

Margaret Tate: What does that mean?

Andrew Paxton: You heard me. On your knee.

Margaret Tate: [she kneels] Fine. Does this work for you?

Margaret Tate: Here you go. Will you marry me?

Andrew Paxton: No. Say it like you mean it.

Margaret Tate: Would you please, with cherries on top, marry me?

Andrew Paxton: Ok. I don't appreciate the sarcasm, but I'll do it. See you at the airport tomorrow. 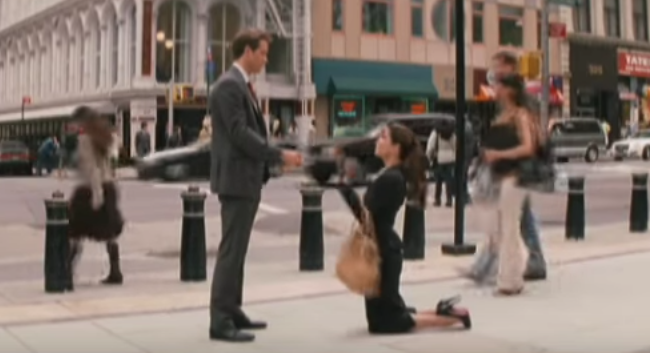 Margaret being the natural boss that she is has to take a step back and get over herself to save her career. This is the first dynamic change in this couple that eventually brings the two closer. By putting her guard down and allowing him to be “in charge” in this situation she is building the strength and equality in their relationship.

In my last two comparisons, I chose the two strongest character change scenes.

My mind hath been as big as one of yours,

My heart as great, my reason haply more,

To bandy word for word and frown for frown;

But now I see our lances are but straws,

Our strength as weak, our weakness past compare,

That seeming to be most which we indeed least are.

Then vail your stomachs, for it is no boot,

And place your hands below your husband’s foot,

In token of which duty, if he please,

My hand is ready, may it do him ease.

Throughout the play we have come to know Katherine as a strong-willed, stubborn independent woman, we have never known her to be submissive. In this scene, Katherine takes it upon herself to address the wives of the other husbands present in the room. After her little speech, she goes over and gives Petruchio a kiss, with everything that went on between the two something must have brought them together. The struggles that they both faced while in the relationship has changed them so much that they have formed their nemesis into a real relationship.

The same thing happens with Andrew in The Proposal but his approach is a little more aggressive. Margaret leaves Andrew at the altar right when everything is about to be put in place and goes back to her job to collect her things and leave… forever. Andrew, realizing that he had fallen in love with her rushes to their place of work and confesses to her, in front of everyone.

Andrew Paxton: Three days ago, I loathed you. I used to dream about you getting hit by a cab. Then we had our little adventure up in Alaska and things started to change. Things changed when we kissed. And when you told me about your tattoo. Even when you checked me out when we were naked. But I didn't realize any of this until I was standing alone... in a barn... wifeless. Now, you could imagine my disappointment when it suddenly dawned on me that the woman I love is about to be kicked out of the country. So Margaret, marry me because I'd like to date you.

In the beginning, Andrew kept his tail between his legs around Margaret, she was very intimidating and he didn't want much to do with her. He later found that the only way to get his point across and actually keep the woman that he loved he had to abandon his normal coward like behavior and stand up to her.

In both The Proposal and Taming of the Shrew, we see two couples that can't stand each other but need each other to succeed in life. In order for their relationship dynamics to work, they have to sacrifice certain strong traits that they are known for. By going through hardships while simultaneously getting rid of parts of themselves they grew closer. The love that these characters had for each other may not have been traditional but it was strong, everything they went through helped them form the love they have for each other at the end of their story.