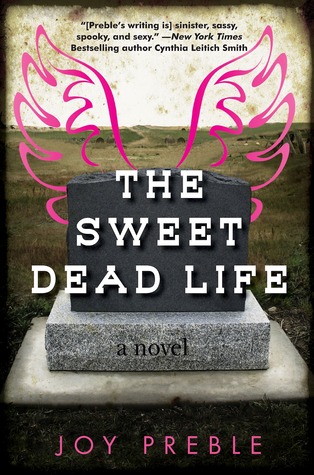 When you hear don’t judge a book by it’s cover, sometimes you can sometimes you can’t. The title it can tell you what you’re going to read about, other times it’s an important hint that will help you solve the puzzle in the book, in this case this book doesn’t do neither. The Sweet Dead Life by Joy Prebel will have you questioning if you can trust anyone, even the people who sell you shoes. You read the journal entries of 14 year old Jenna Samuels whose life isn’t the best. Her mom spends all day in bed, her father is missing and her her older brother tries to keep the family together but he is too high to focus on anything. To add to all of Jenna’s stress she becomes sick, to a point where she collapses and her brother tries to rush her to the hospital but instead ends up crashing the car. Jenna wakes up to her brother who doesn’t have any scars and he’s glowing, almost a heavenly glow. Jenna comes to realize that her brother did not survive the accident and that she’s not sick but poised. The sent her brother back to help Jenna find the person who has it out for her.

The Sweet Dead Life is Prebel’s 4th book out of 6, the first three were part of the 3 book Anastasia series, and her newest one coming in 2015 Finding Paris. Prebel’s preference for writing is fantasy and mistery following stories of strong female characters. Mystery is her favorite genre because it’s fun to write but it brought life to her simple Texas life. Many of her favorite authors were mystery writters which encourage her to write her own stories. Her writing like most authors isn’t the ordinary stuff that talks about girl meets boy and falls in love or vampires, fairies and monsters, she tells stories using myths and legends that go back to the 1900’s. In this book Prebel talks about angles and normally angles are more a religious belief that when you die and you were forgiven for your sins you got to heaven. Some people believe in this others don’t and instead of Prebel trying to push that angels are real and we should believe in them she puts a fun twist on them that has you saying, “I would have never thought of that”

The first time I read this book the second one was not out yet, but it now out and I am looking forward to reading the second book. Like many mystery series if the writer doesn’t catch your attention you get bored and you want to skip to the end of the book. This book has it’s moments where you want to skip ahead but I advice not to do this beascue you will miss important parts that if you don’t know it you will be confused, and the ending will confuse you more, it’s one of those endings if you don’t know what happened you won’t understand it. Not like many books I have read in the past the ending of this book actually does the book justice. It answers all the questions brought up in the book about Jenna’s dad and where he has disappeared to, Jenna’s poising and why it happened to her and the truth behind the car accident. It’s like watching a crime show, the writer gives you clues to solve the crime you get to know the bad guys of the show and you guess who the killer was, but with this book there’s more than one culprit and you won’t know until you keep reading. The Book keeps you engaged and gets you thinking if the crime is a lot more complicated than your simple poisoning.

The Sweet Dead Life is a great book for people who aren’t afraid of trying something new. It talks about topics some people might not believe in and it does have few sexual references, and the plot line could be boring to people who aren’t willing to wait for the best parts.  so I recommend it for people 15 and older and maybe mature 14 year olds who will take this book seriously and who will take their time to read and take in the books details. The book cost me about $18 because it was the hardcover but it was worth it. And when you get to those parts it will leave you speechless, it was worth the wait. I wish they would make a movie about it because I would love to see the way they portray each character. The Sweet Dead Life will have you thinking maybe it wouldn’t be so bad becoming an A-Word.

For my creative I re-did the cover of the book. I felt like the original cover was a little dull for such a good book, and it just left the book looking like another boring book about death ans coming to life. Let's face it people do judge books by it's cover and if it doesn't grab the readers eye one way or another they'll look straight past it on the shelf. So with a little bit of help from photoshop, google images and the details from the book I’ve created a different cover that suits the book.

Recreating the book cover was a unique idea. It looks similar but you changed the boots but that means its significance.