Some facts about the history of Printmaking are that printmaking originated in China after paper was invented around AD 105, then Relief printmaking appeared in Europe in the 15th century. This was the same time that papermaking was imported from the East.

Here are some facts about the invention of Printmaking.They enabled Chinese scholars to study their scriptures, the classic texts and accompanying holy images were carved into large, flat stone slabs. After lines were cut into the stone, damp paper was pressed and molded on the surface, so that the paper was held in the incised lines. This technique was the foundation of printing. The development of printing continued with the spread of Buddhism from India to China; images and text were printed on paper from a single block. 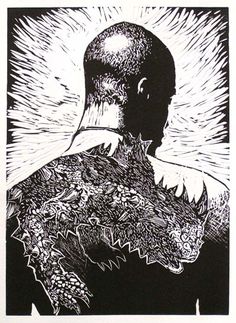 I think that this is a good Print because it complies two different things into one by using intricate detail of black and white positive and negative space. Light and dark shades really compliment the view that you have when you see this picture. As you can see there is some kind of explosion or light that is shining on the man. We not only know that it’s shining because of the light itself but also because of the reflection kind of mirage (which can be seen on the man’s neck) that the artist puts into this piece.