Posted by Chandrea Lack in Art - Freshman · Hull · d2 Band on Tuesday, June 13, 2017 at 5:17 pm
My element is lead. The atomic number is 82. My element is used in your pencils that mainly some people use. My element is also poisonous, but we don’t ever think about eating it. The function of my element is to get the job done and along with that you can use lead in different types of pencils and it is erasable too. My idea kind of just popped up because I thought it would be nice to have a unicorn (eraser) for the mistakes and a pencil at the end to show that pencils are always the way to go when writing something or drawing. The process that I went through was drawing a lot of different ideas to fit my element. If i could do something differently it would be to change where I put the atomic number on my stamp. The part where i was stamping was my most favorite part.
Posted by Rasa Watson in Art - Freshman · Hull · d2 Band on Monday, June 12, 2017 at 11:52 pm

My element is Vanadium. The atomic number for Vanadium is 23. Vanadium is a metal element. It can be used as an additive to steel to prevent it from rusting. When I was doing research I found out that Vanadium was discovered in mexico by Andrés Manuel del Río. the element was named after the Scandinavian goddess of beauty and fertility.

At first I wanted to create a stamp of mexico with a V in the middle, however that seemed kind of basic and boring. I then decided to look up what a fertility goddess looked like. I decided that it was a creative way to show the element Vanadium. I then tried to draw the fertility goddess as a stamp to the best of my ability. It took me a few times to get the stamp that I wanted, but I liked my final sketch.

Now that I had my sketch I had to draw it on transfer paper and flip it so that my stamp won't be backward when I use it as a stamp. I then used a 4x6 card to imprint my flipped sketch on transfer paper to the card. I used a pencil to indent my stamp. The indentation would be the positive space for my stamp. When it came time to stamp, I rolled the blue paint evenly on mt card/ stamp and placed it on a piece of paper. I then pressed on the stamp with a wooden spoon to distribute the paint on the paper. I removed my card/ stamp to reveal my element stamp. If I was to do this stamp again I would make sure that my indentations on the card were deep enough so that all of the parts that should be negative space were negative space and all the places that should be positive were positive.

My favorite part of this project was printing my stamp. It was nice seeing my stamp come alive with color. The positive space really pops and represents Vanadium the way I wanted it to.

My element is Tungsten. The number is 74.

Tungsten was first discovered by two brothers name Juan Jose and Fausto Elhuyar when they were living in Swedin. Since tungsten is heavy, they named it tungsten because it means heavy stone in German. It was made out of minerals and tin.

As I was doing research for tungsten, I came across diamonds because when diamonds were first discovered, it was heavy. So that’s when I started to draw diamond as my imagery.

There was a lot of process when doing this print. The first process was that drawing the diamond was hard because I have to make it perfectly semetrical. Then when it was time for printing, it was easy because there was no need to turn it backwards. While drawing it on the foam, the only thing that need to be backward was the number and the letter. While printing it, I evenly rolled the paint and then rolled it to the foam. After that, I layed a paper on top of it and then evenly rubbed it on to the paper. After that, your picture will be perfect.

The part that i really enjoy most was printing it on paper. I enjoyed this because I get to roll the paint evenly and then stamp it on to the foam. After I rolled it on to the foam, i stamped it on to a blank sheet of paper and then received a final product.
Posted by Jayden Tull in Art - Freshman · Hull · d2 Band on Saturday, June 10, 2017 at 11:41 am 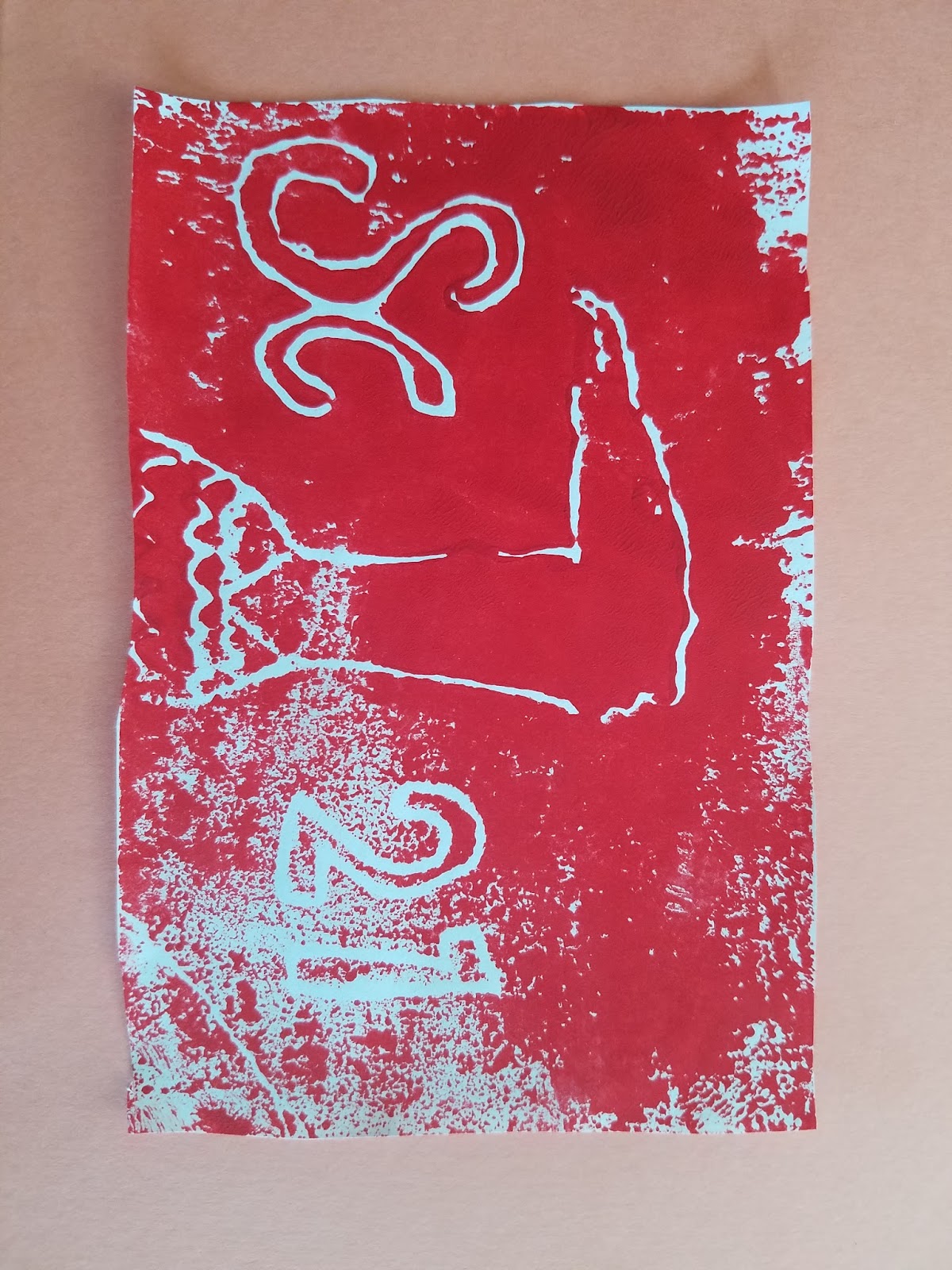 Posted by Cianni Mack in Art - Freshman · Hull · d2 Band on Friday, June 9, 2017 at 10:18 pm
My element was Iodine, element number 53. Bernard Courtois was trying to extract potassium chloride from seaweed. Then he added sulfuric acid to result in a purple vapor. That's where the name iodine comes from. The origin of it's name is from the greek word iodes. Iodes means violet. Iodine is a necessity in your body. Some things it is used in is medicine, photography and used in table salt. For my print I did a salt shaker. I decided to go with the salt shaker because iodine is put in table salt to prevent thyroid disease. The first step was to make a the design. Secondly I had to trace it onto wax paper then foam. When tracing it on the foam I had to make it backwards so that when I printed it , it would come out the right way. The last step is putting paint on it and putting onto white paper. If I were to do this project over I would trace it onto the foam better because I had issue with everything coming out the way I wanted it to. Overall my favorite part was painting the foam because my favorite thing to do in art is paint.
Posted by Niya Petty in Art - Freshman · Hull · d2 Band on Friday, June 9, 2017 at 3:00 pm 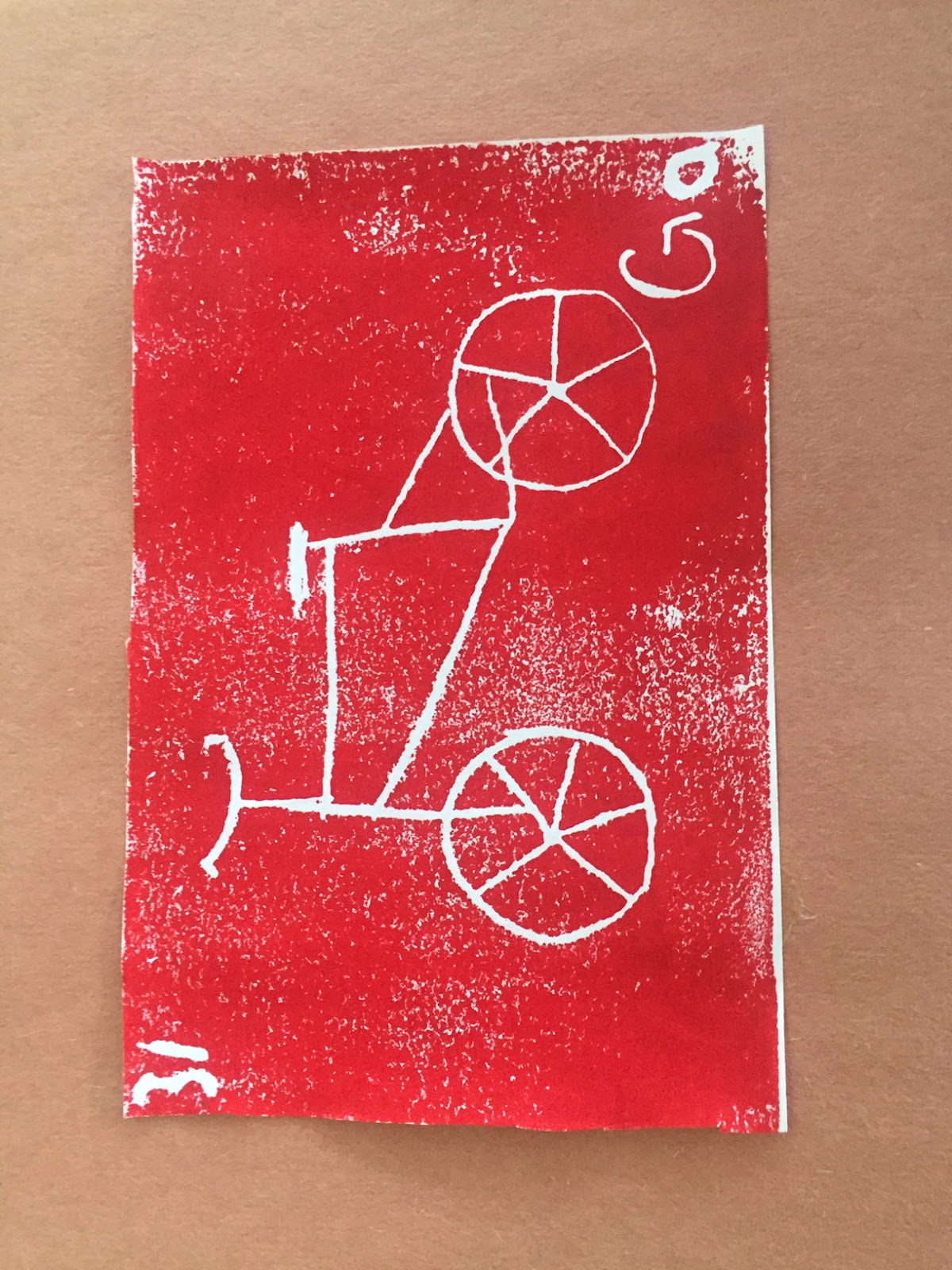 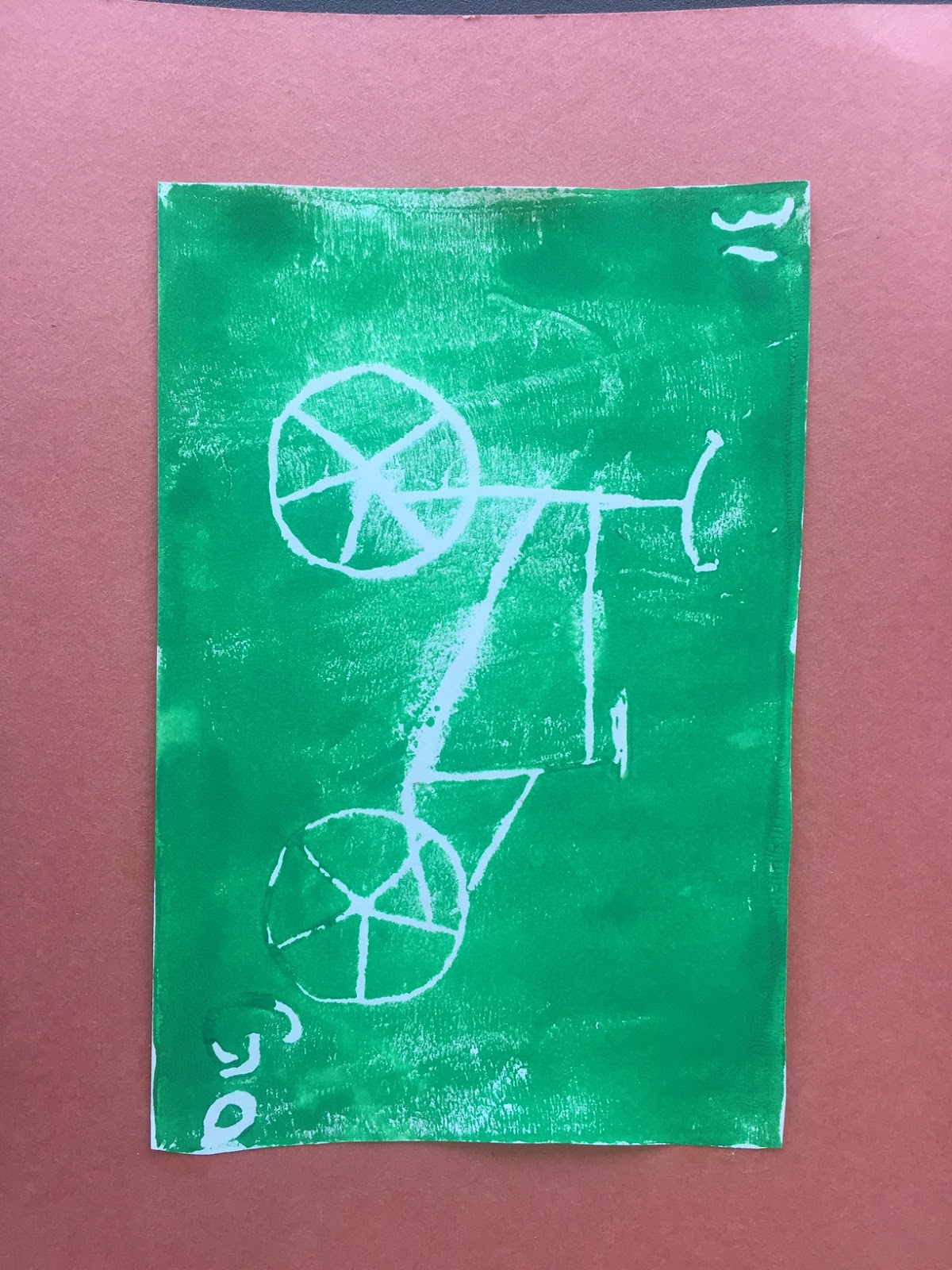 This is my print/ matt that represents the element Gallium. Gallium has an atomic number 31 and I choose to draw a bike because some bike frames are made out of gallium. I will tell you that search and thinking of things the draw for this element was difficult to me but I choose the bike. Gallium was discovered spectroscopically by the French chemist Paul-Émile Lecoq de Boisbaudran in 1875. Gallium also melts so in room temperature or higher it will turn into a liquid. AT first, for my print, I was just going to draw a bike frame but when I looked at it, I told myself that people might not know what is is so I added the wheels to make a complete bike but I wanted the main focus of the print to be the bike frame . If I were to do this again, I would do more research about the element to see where it comes from and what object of today are made out of gallium.
Posted by Daeja Richardson in Art - Freshman · Hull · d2 Band on Friday, June 9, 2017 at 2:45 pm

The element that was chosen for me was Chlorine which has 17 for its atomic number. In 1774 Chlorine was discovered by Carl Wilhelm Scheele. Chlorine is one of the elements that isn’t just found in free nature. Scheele combined MnO2 and HCI to get Chlorine. In today’s society Chlorine is used to help drinking water be safe for humans and for pool water as many people may know. It also has to do a lot with the production of paper, plastic, dyes, textiles, and paint. I didn’t want to be basic a draw a pool because everyone knows the chlorine is in pool water. So I used bamboo trees because chlorine is found in that. From making this print it took plenty of patience and creativity. First I to sketch what it should look like. Then I went on the the template. After that I went the styrofoam which was a little tricky because it had to be drawn backwards. Once I got to print my element it was coming out great. If I were to do this project over again I would crave in the styrofoam a little because sometimes the paint would get in the shallow parts. The final print process was the most enjoyable for me because once I got to see my final project done I was statisfied.

Posted by Elijah Afrifa in Art - Freshman · Hull · d2 Band on Friday, June 9, 2017 at 2:38 pm
My element is Sulfur and it's atomic number is 16. Sulfur is found in volcanic areas. This element can be used in many ways such as in matches, fertilizer, and even gunpowder. The reason I chose to draw this picture was when I found out that they were in matches and matches make flames. I went through the process of printmaking to finally get my final piece. This process took about 4 weeks to complete.If I had a second chance to do this I would probably change the image that I created. I would have made a more common symbol to represent Sulfur. I enjoyed the final step of printmaking.I had to dip the stencil in ink and stamp it onto a piece of paper.
Posted by Mackenzie Hopkins in Art - Freshman · Hull · d2 Band on Friday, June 9, 2017 at 2:18 pm

My element was gold, the atomic number is 79. Gold is primarily used in jewelry and aesthetics, it can also be used in food, and money. In old stories dragons usually guard piles of gold, and my picture is a dragon on-top a pile of gold.

Mrs. Hull taught us how to sketch into our foam, flip it over so it’s backwards, then roll it and make a print of it. I would spend more time working on the stamp part and painting it correctly, so it looks better. I enjoyed drawing the dragon the most, because it was fun to do. 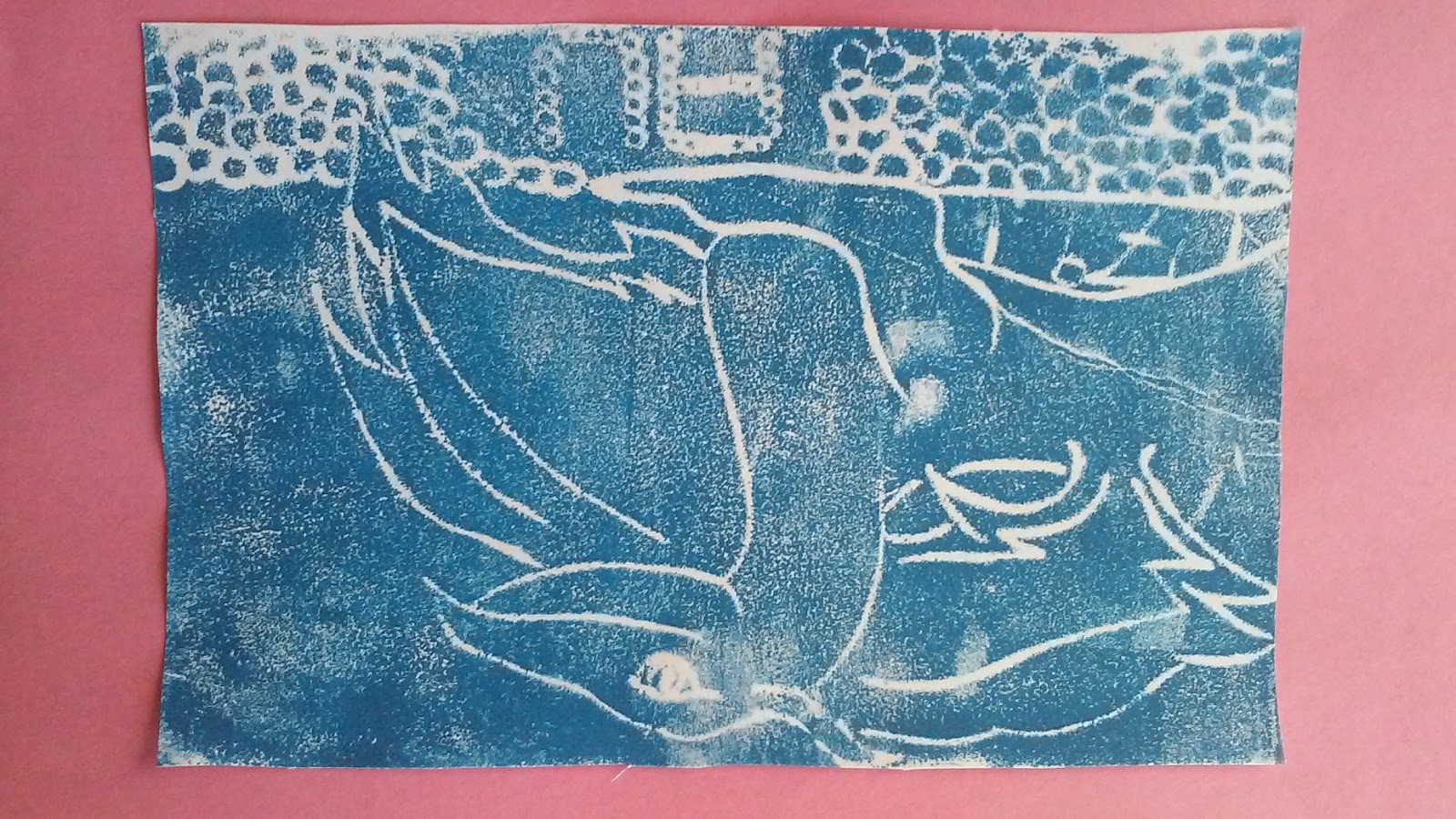 Posted by Sarah Son in Art - Freshman · Hull · d2 Band on Friday, June 9, 2017 at 2:17 pm
​The name of my element is Calcium. The atomic number is 20 as you can see on my final art print. Lime came to great use by heating limestone. Can be found in 99% bones and teeth. Calcium plays a role in having healthy bones, so I decided to draw a milk carton. I looked at different examples on Google as well as the website that Ms. Hull provided us with, the one with all of the elements on them. I drew other examples in my sketch book and asked my friends to help me choose a final design, that is how I came out with this one. If I could do this differently, I would definitely darken the parts where it would be white so that it could appear well on the paper. I enjoyed transferring my print to another paper and putting onto a construction paper. We painted our foam plate and then put it under a white paper, used a spoon (rub the spoon all over the paper), and then took the paper off of the plate. Then, our design is on the paper! I cut it out and then put it on a construction paper.