Posted by Sierra Dinvil on Friday, June 8, 2012 at 10:17 am
For my "What If" I chose to focus on what life in the United States would be like if Chief Justice Fred Vinson had not died of a heart attack during the Brown V. Board trial. To show life in the US during this time I chose to portray life through the diary of a public high school student from Atlanta Georgia. I envisioned that during this time period, segregation wouldn't be so much of an issue, but things such as jobs and public schools would remain segregated especially in the south.

What I liked most about this project is how much "imagination" and creativity you have to put into it. For instance, there is no right answer to how you envision life to be like if a key event didn't occur. To see different people's perspectives on some of the same points of divergences is also very interesting. This project causes you to think outside of the box and realize how such small changes in different incidents can drastically change how life is now in the United States. Although this was the most intriguing part of the project, I also found this to be the most challenging as well. Essentially this project is asking us to find a point in history that would change present day life. It's very hard to grasp the concept of a world different than the one that we are so familiar with now.

I found it interesting how something so unexpected can potentially change the course of history forever. For instance by keeping Justice Fred Vinson alive, the Brown V. Board case was lost. I chose to make this the outcome because while Vinson was still alive the jury was leaning more toward that direction. By making such a subtle change, schools in 2012 (in my opinion) would remain segregated. Of course there would be more cases, complaints, and protests on the topic but I feel like judges would constantly refer back to this trial, similar to how the used the Plessy V. Furgeson case.

If I could do this project over I would find more ways to get my point of Divergence across, or to make it more clear within the project and not just in the reflection. Another thing I wanted to do was create a documentary of the teenage girl (Liz). However, time was an issue so I just took the potential script and turned it into a firsthand account diary. 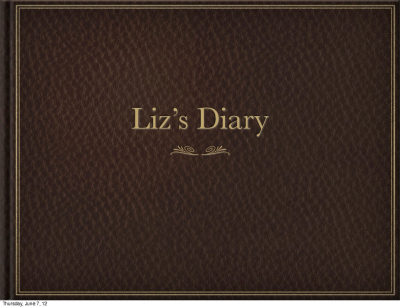