After learning about the labor conditions in China, the country we import the most from ($425 billion worth of imports in 2012) through some disturbing news stories, I realized that it would be a very good idea to try to purchase American made products whenever possible. This not only drives money away from cruel labor practices and towards the American manufacturing industry, but helps reduce our trade deficit. The trade deficit is the amount we export minus the amount we import from a country. If this number is negative, it’s called a trade deficit. If it’s positive, it’s called a trade surplus. 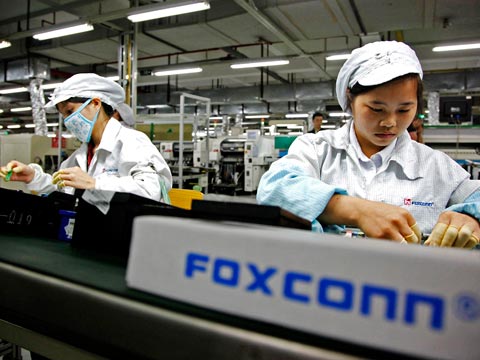 Foxconn builds circuit boards for Apple and other tech companies. Their factory in Shenzhen was the site of several worker suicides in 2010.

So, are these labor conditions that bad? Well as you saw in the hyperlinked text, it is so bad that people kill themselves over working conditions. There is an entire website dedicated to reporting poor working conditions in Chinese factories. According to this report, “deplorable working conditions characterize Apple’s supply chain,” indicating that things like child labor, inhumane hours, and insufficient pay for living are par for the course in the Chinese manufacturing industry.

On a more positive note, buying American goods will reduce our trade deficit because less money will leave the country to pay for imported goods, while our exports will not be affected by an American initiative to buy domestic. In addition, buying American made products will provide incentive for companies to move manufacturing to the United States. For example, a scenario:

BOSS: Why did this happen!

ADVISOR: Our focus groups say they’ll only buy American made, and our toys are made in China!

BOSS: You heard the customers! Move production to the United States!

In conclusion, you should buy products made in the United States, because by buying foreign made products your money goes toward unscrupulous business practices and increases our trade deficits. Buying American made products also encourages manufacturers to move to the United States because you are willing to spend more for a domestically made good. The extra cost is merely $4 for a cell phone! Is ruining your local economy worth it for $4? In addition, I have a few more questions to leave you with:

Why don’t you buy things made in the United States?

Do you check where the things you buy are made?

Did you know about poor labor conditions in China before reading this article?

Do you know anyone who makes an effort to buy domestically produced goods?

E-mail me at csamodai@scienceleadership.com with your answers, if you feel strongly enough to do so.

Here you can find an up to date ticker on the United States trade deficit.

Here you can find the bibliography for this post.

Cameron, I know how this is something you feel strongly about, and something I feel strongly about, too. Financial Issues are serious issues nowadays. By the way people reading this, check out my post on the bottom of the third page called "Financial Education." It's a lot like this one, just addressing the issue of education in children. But anyway. Cameron, you could make this so much better by clearing up some wording. Other than that it's absolutely fantastic. I love it!

Cameron, this is a strong post with a clear point. I think you introduce the topic well and provide good examples to support the benefits of U.S. made products. The only thing that I would add is an introduction, who are you? Why are you talking about China? It would also be good to re-cap the information in the hyperlink, just in case someone couldn't access them.

Your topic is really good and supported with great information and links. More examples on products from America being better and not much more expensive. Another visual would really drive the point home, otherwise great.

Your topic is really good and supported with great information and links. More examples on products from America being better and not much more expensive. Another visual would really drive the point home, otherwise great.

Hey Cameron, you have some really good information and links. However I think you need to ease into the topic with an introduction stating who you are and what the project is that we are doing. Other than that, this is a great start.