Hello, my name is Cacy Thomas and I am a 9th grader enrolled in Science Leadership Academy. In my English class we were told to write 3 blogs about an issue that we are passionate about and would like to spread to the world. This is my first blog post and my issue is concussion awareness and research in young athletes. I have cared about this subject since October 2nd, 2011 when I received my third concussion following my first and second concussions on June 6th, 2011 and July 17th, 2011. All within a five month period my life was completely turned upside down.

Before I received my head injuries I had many instances where I had no idea what was going on or even what a concussion was. So just to clear the air and make sure you know what I am talking about, a concussion as described by Centers for Disease Control is,

"A type of traumatic brain injury, or TBI, caused by a bump,

blow or jolt to the head that can change the way your brain normally works.”

Click here to see a short video explaining more in depth of the definition of a concussion. 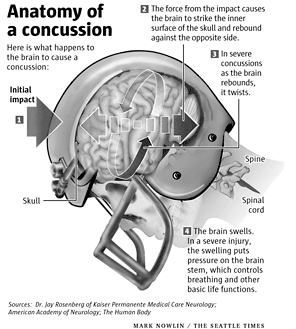 The anatomy of a concussion from The Seattle Times.

My story started in 6th grade. I was outside at recess when I turned around and a football hit my left eye. I didn’t think anything of it until my head kept hurting a few days after the incident. My mom took me to my pediatrician and they were more concerned about the 10% chance that my eye socket was fractured rather than my consistent headache. They sent me to CHOP (Children’s Hospital of Philadelphia) and the doctors were wondering why I was even there. Only one person told me that I had a “mild” concussion and that it was no big deal. So I shrugged it off, kept playing sports, and doing all of my normal activities. Then on July 17th, 2011, just one month later, I was at a soccer camp and took a bad header (when someone hits the ball with their forehead so it goes in the opposite direction) where I could not remember what I ate for lunch or dinner. Again I was told I received a “mild” concussion and returned to play the next day. Three months after the second incident I was knocked over and kicked in the head in a soccer game and was immediately dizzy and disoriented. We finally went to a concussion specialist and realized that this was serious. Finally after 2 years of physical and emotional rehabilitation, taking 8 different medications and vitamins, being home schooled for about a month, and only using technology for about 15 minutes a day I have been cleared by 2 out of 4 of my doctors. These injuries have affected my vision, emotional state, school work, and my athletic ability. I can never play contact sports again and will never be able to fulfill my dream of becoming a professional soccer player. 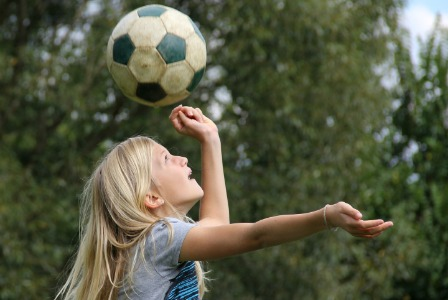 One example of a header from Sheknows.com where a young girl is preparing to head the ball.

Hundreds of thousands of young athletes are experiencing what I went through; I can’t stand to see that happen to anyone. My concussion symptoms will stay with me forever because of the lack of research of concussions and other head injuries. The fact that my pediatrician was more worried about my eye socket than potential brain damage is very frightening! We can prevent or lessen the dangers of concussions through research and awareness. Things such as baseline and neuropsychological testing are some examples to help know where your cognitive skills were before and after the injury. Neuropsychological testing is explained by The Sports Concussion Institute as,

“...designed to measure cognitive skills and abilities such as intelligence, problem solving, memory, concentration, impulse control, and reaction time, to name a few. At the Sports Concussion Institute, both computerized and standard paper-and-pencil tests are utilized to gather evidence-based, comprehensive data on cognitive functioning before (i.e., Baseline Test) and after (i.e., Post-Injury Test) a concussive injury occurs.”

Here are just some statistics from clearedtoplay.org I think you will find to be very eye-opening. I believe that these numbers can be brought down with proper care, recovery time, and awareness.

15.8% of football players who sustain a concussion severe enough to cause loss of consciousness return to play the same day.

Children in our society are not only feeling the physical symptoms of head injuries, but also psychological. Many have been diagnosed with depression, like myself, because they can’t play the sport that they love. I am wondering how I can reach out to those kids in need. And will they be willing to be open and share their stories with me? I hope to learn more about how each individual person is affected differently because no two concussions are exactly the same. I also want to further my research in the psychological symptoms of a concussion to help make a difference in the lives of those who have suffered from concussions.

Thank you for taking the time to read my post and feel free to check out my bibliography to see all of my various sources. Also look out for my second blog post!

This an amazing blog post! It's clear that this topic is very important to you. It was very well written and had a lot of interesting information. Maybe you should include more images in your post next time. Great job!

Cacy this really made me feel bad. I read about you dream about being a proffesional soccer player and knowing you can't play is really sad. I like how you can personally connect to your project unlike many of us. I believe you have a really good idea and start to your project. Good Job

Cacy, this blog post is fantastic! It is informative and very moving. I felt like I was there with you through the injuries and doctors. You used very good imagery to make that happen. I can tell you are very invested in the topic. I thought your statistics were very useful. Overall, this was a great article!

p.s. you got your first concussion on my 12th birthday!

This is a great blog post. I like how you thunk outside the box with your topic and chose something that nobody else did. Your blog gave a lot of information showing that you were well educated on the topic especially since it comes from personal experience.

Cacy! This is a great first blog post and covers a serious topic that means a lot to you. I think that this makes it all the better. However, I know that you can include more about how much you've learned. You've talked to some really important people, and what about that "Think Taylor" thing? Include something about how much you've learned. Other than that, perfectamundo!