When people are angry do they take anger out on animals?

People with problems tend to abuse animals and neglect them of basic necessities like food, shelter, and water. I believe when people are angry they take their anger out on animals. They do this because the animal is either the closer target or they find joy in abusing animals. So some things that I have found in the website (you can click here), is that facts show that 13% of animal abuse come from a domestic home.  As I researched I have found something on how abuse can affect a child, so when a child is young they learn about abuse by being a victim of it or have witnessed it. So as the child gets older and as he/she gets a certain development with anger issues they would tend to build up anger, and then the child would take their anger out on animals. If the child has not began to seek help by the time as an adult they would go after other things such as peers, children, adults, even the elderly. To them these people would be considered a vulnerable opportunity. Also, family members being held against for child abuse also had abused animals. In in more than half of these cases, an abusive parent had killed or injured a pet a child victim continued the cycle of violence by abusing a pet.

In one study that i have found on this website is that, 70% of animal abusers also had records for other crimes. Domestic violence victims whose animals were abused saw the animal cruelty as one more violent episode in a long history of indiscriminate violence aimed at them and their vulnerability.Another study that I have found is that, a lot of pet owning women entering women’s help treatment centers reported that they have  injured, harmed, killed or even threatened family pets for revenge or to  control victims and that 32% reported their children had brutally injured a pet or killed a pet. As I have found in my studies about my topic and things that I have heard from the world is that pets may suffer unexplained injuries, health problems, permanent disabilities at the hands of abusers, or disappear from home. 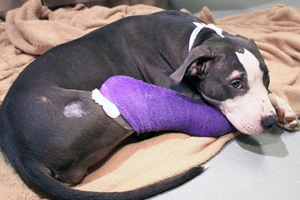 This is a picture of a pit-bull named Remy. This dog was found in June 2013 she was a victim of animal cruelty and abuse. When the ASPCA found her she had two broken legs, skin disease,  and severe muscle atrophy, she also was so weak and frail that that she could not stand or walk. This was caused because she was a victim of animal abuse. To me this is what happens when people are selfish and does not care about the needs of an animal. Although animals are not humans does not mean that we can look at them as a piece of trash, they are still living beings, and we can still treat them with respect as we would want someone to give us. 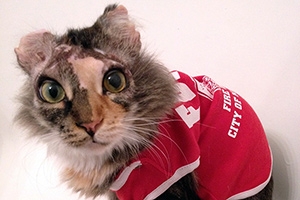 This is a picture of a cat named Kylie she was a victim of chemical burns. She was found late last year when a dog owner found her. Kylie was in a lot of pain and it took several surgeries so that Kylie could be healed. Everyone at the hospital fell in love with her as she began to recover. So like I said I do not understand how can people do this to defenseless creatures, Kylie was affected by chemical burns that caused her to lose lots of skin, Kylie is a survivor. 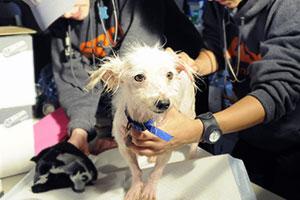 This is a dog rescued from a puppy mill, I am not sure what this puppy’s name is but it was found on a facility with a lot of other animals. These animals were rescued in 2011 and people were complaining about these animals. These were animals with problems like mold and matted fur, suffering from infection, dental disease and various other ailments. This is a link to this page if you would like to get more information on that topic.

One reason that I became interested in this topic is because growing up I hated to see the commercials with animals on them that makes them look really said, and it gets a little emotional. So, doing this is a way to help relieve my sympathy and to get the word out to others. I am hoping that this will encourage people to help abandoned animals in need and if this comes across someone with one of these problems to get treatment or counseling.

This concludes my blog on animal abuse if you have any comments, please leave them below and if you would like me to answer leave them below as well thank you for reading my blog. For further information visit my bibliography.

Y'know those commercials with the Sarah McLaughlin songs and the one eyed cats and the one legged dogs and everyone is sad? Yeah.

Good Job! You have a great topic and know your information. Your paragraphs are well written and immerse me. I do feel that you should start off with an introduction and maybe talk about why this topic interested you earlier on in the post.