Hi! My name is Isabel Medlock and I am a freshmen at Science Leadership Academy. This year in English class we had to choose an issue, research it and then try to do something to raise awareness of the issue or help solve it. The issue I chose is the stigma of mental illness. The reason I chose this topic is because mental illness has interested me before and after reading a little bit more about it I decided it was a good issue to choose. Another reason I chose this issue is that some members of my family are affected by a mental illness.

People perceive mental illness with a negative perspective and that leads to prejudice, discrimination, and stigma. The Mental Health Commission defines stigma as a mark of disgrace that sets a person apart. Many people think that mental illness only affects a few people when in fact in a given year one quarter of adults are diagnosable for at least one mental disorder. Another common belief about mental illness is that all people with a mental illness are violent and should be kept in a hospital.  In a 2006 Australian study it was found that 1 in 4 people thought that depression was a sign of weakness and would not employ someone with depression. 1 in 3 people said they would not vote for someone with depression and 1 in 4 people thought that people with schizophrenia are dangerous.

This is a chart that shows the percentage of adults with a serious mental illness by state: 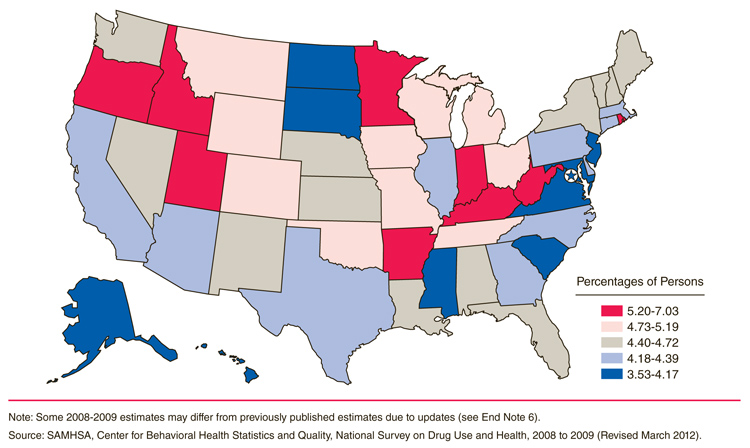 People who have a mental disorder are discriminated.  In England, if you have a mental health condition you are not allowed to serve on a jury. You can also be removed as a director of a company if you have a mental disorder. In a video I saw one woman said that she wanted to join a local weight loss group. When she told the counselor who ran it that she had a mental illness she was told that she shouldn’t join because she would be disruptive and the other members of the group wouldn’t want someone with mental illness in their group. There are just a few examples of ways that people with mental illnesses are treated unjustly.

In 2008 only 13.4% of adults received treatment for mental health problems. That’s a little over half of the adults diagnosable with a mental disorder. The reason people aren’t seeking treatment for their mental disorders is the stigma surrounding mental illness. The stigma makes people too ashamed or embarrassed to get the help they need. 90% of the people who commit suicide have depression or another mental disorder. Most of these deaths could have probably been prevented if these people weren’t afraid to get the treatment they needed. It’s important that we change the view on mental illness so that people are no longer afraid of getting help and don’t choose to end their lives. People with mental disorders have to live with the stigma and the discrimination every day and it isn’t fair. 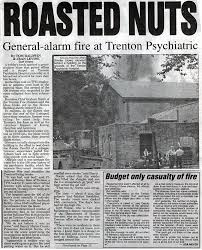 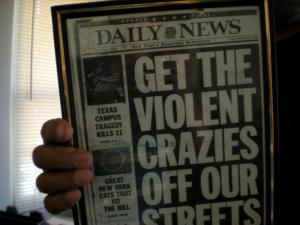 These two newspaper headings are examples of how the media portrays those with mental illness.

After researching this topic I have new questions. How did people view mental illness in the past and how has their view changed since then? Are there illnesses that are viewed more negatively than others? Why did people start viewing in a negative way?  How are children and teenagers affected by the stigma of mental illness? As I keep researching this topic I hope to find the answers to all these questions. I also hope to find more stories about the experiences people have had living with mental illness.

Here is a link to a video of a man with schizophrenia and his mother discussing the stigma.

I enjoyed reading this blog post. I also have a family history of mental illness so I can relate to your curiosity on this subject. On your next post I would like to hear more about those newspaper articles presented at the end of the blog post. Also the statistics were well incorporated into the post and surprised me a little. Keep up the good work !

I enjoyed reading this blog post. I also have a family history of mental illness so I can relate to your curiosity on this subject. On your next post I would like to hear more about those newspaper articles presented at the end of the blog post. Also the statistics were well incorporated into the post and surprised me a little. Keep up the good work !