Posted by Esperanza Gonzalez on Thursday, November 29, 2012 at 12:19 pm
What pops in your mind when you hear the work “Internet’’? I bet your most common answer would be; Facebook, twitter, Instagram, Google, or even youtube. Right? Well..the internet is tool that everyone uses around the world. Although it can extremely helpful, but also very efficient to bullies. Bullies can cause harm to those innocent ones, and those innocent ones can commit suicide. The internet is one of the few tools bullies use to harass other people. I’ve heard numerous stories about teenagers committing suicide due to bullying, but didn’t seem to care. I didn’t think it was a big deal. Time after time, the number of suicides became to increase larger and larger. Mrs. Dunn, my English teacher introduced a project called “You And The World.” You and the world is a project based on a specific topic of your choosing and making a difference in the world. I decided to choose a topic that interested me! I knew exactly what I was going to do, which was “Teen Suicide”.


Suicide is the process of purposely ending one's own life. Bullying is typically defined as the “ongoing physical or emotional victimization of a person by another person or group of people.” However there is also another type of bullying which is called “Cyber-bullying.” Cyber-bullying is when people use technology to harass and emotionally harm other people. There are several reasons that may lead a teenager to commit suicide, but the most common factor is depression. What a person might feel during depression could be hopelessness and anxiety, along with feelings of being trapped in a life that one can't handle. Therefore leading to teen suicide. In some cases they feel that taking their life away is the best solution to their problem and also some teenagers look at suicide as a “welcome escape.” According to the statistics reported by the American Foundation For Suicide Prevention every 13.7 minutes someone in the United States dies by suicide. U.S. Nationally, the suicide rate increased 3.9 percent over 2009 to equal approximately 12.4 suicides per 100,000 people. Nearly 1,000,000 people make a suicide attempt every year. About 30,000 people reportedly kill themselves each year in the United States. Suicide is the third leading cause of death for people 10-24 years of age. According to the a whole different study, 78 percent of adolescents who committed suicide were bullied both at school and online, while only 17 percent were targeted online only. Another statistic provided by Medicine Net “Suicide is the eighth leading cause of death in males and the 16th  leading cause of death in females”. The rate of suicide has been increasing since 2000. This is the highest rate of suicide in 15 years! 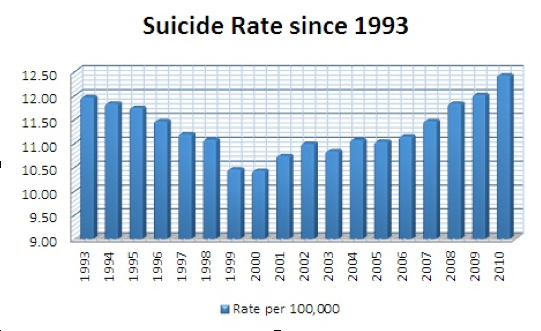 Below a graph provided by the American Foundation For Suicide Prevention about the rate of suicide in since 1993 in the United States.

In this picture here, it shows the accurate number of suicides per year since 1993-2010 in the United States.

Some of the effects our loved ones can have is feeling blamed for what has happened. Wondering if they could’ve prevented it. Feeling guilty for the committed suicide. Other factors that may contribute to teen suicide could include; divorce in parents, violence at home, inability to find success at school, feeling unworthy, rejection by friends or peers, and death of someone close to the teenager. The various signs that a teenager can show when they’re in the process of suicide includes the following; plans ways to kill him or herself, dramatic changes in personality or behavior, sign of depression, begins to act recklessly, give away sentimental possessions, loose of appetite, talk about suicide or death in general or even having sleeping habits.

Some of the ways that we can prevent suicide is by showing unconditional love and support to the person, understanding and respecting their feelings. Convincing that there’s a way to overcome their fears and showing complete thoughtfulness to help out. There’s also other choices such as medication, counseling, health professional, residential treatment, or spiritual advisor. In the Boston Children’s Hospital there’s a treatment offered to teenagers who are suicidal at a young age, which is called Psychotherapy.


Suicide is the worst way that a teenager can die from. I hate the fact that right now as I’m writing this paper, there’s teenagers right now attempting to commit suicide. It makes me feel emotional and determined make a difference to prevent suicide. I’m willing to donate my time to this topic and leaving with a feeling of success and satisfaction once this project ends.