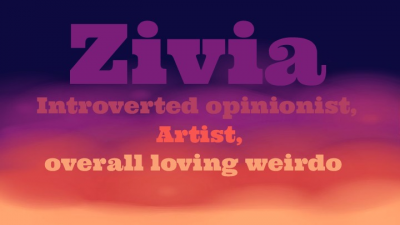 While researching for this project and going though the various sites we were told use, I started to realize that I recognized a lot of the terms and ideas that were shown. I had unconsciously used them before when drawing, just never had the words to describe them. My brain knew what it liked, and that seemed to fit with what was suggested. I actually looked back on a few (fully finished) pictures I had draw before I learned these terms, and saw quite a few pop up (bleeding, rule of thirds, contrast, etc...). Based on this, I'd say I learned that the things I unconsciously preferred had names, and were common thing that quite a few people's brains also preferred.
For my second slide, I started out having no idea what to change. I liked how my original looked, and every little tweak I tried (different fonts, a picture, a border, size changes, slated writing) looked off, even imperfect (and not that perfectly imperfect that crunches in your brain). After flipping back and forth between a few changes, I found that my lines of text seemed a little cramped, and there was an imbalance in the empty space in the top and bottoms of the slide. So, I spread things out, and there was more air and more space.
Research is incredibly important when beginning a project. Finding and using sources give a structure for one's own brain to then take over and add the unique touches. Without that structure, things fall apart much easier. You also need to be able to defend your choices, as Ms. Hull said at one point. If I have nothing to site for information or context, then I have no backup, nothing to support my claims but myself. That leaves me as a single source, and a single source is rarely accepted as proof of a choice or change.

This is so beautiful and very pleasing to the eye you did a really great job with color contrasting and making the important details about you stand out.

I really admire the way you did your slide because you used only words that described you, which was made your slide unique among all the rest. The contrast you used between colors is very eye catching. Even though you don´t have as much as others have on your slide, It still shows a great amount of meaning.