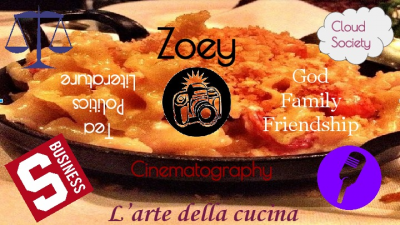 Color: I love purple so the microphone is purple and everything else kind of stuck with the red, black, and yellows from the background picture. I also put in white to be bold and kind of elegant.

Size: I made the fonts 36 to be large and legible for the pyramids. Cinematography is also size 36 font but not in Georgia font instead POiret One to appear a little bigger and appear almost as creative and sophisticated as the art form itself. My name is the biggest its size 92 and Poiret font to appear important and structured but not so that its Times New Roman. The Italian at the end translating to the art of cooking is size 48 in Corsiva font because it should be big since my background and my passions include food. This word should be treated as it is valued so it is large and elegant.

Words as Shapes: As said before often while coinciding with words represent what they meant. I tried to not only capture the definition of the word but what it means to me.  The two pyramids are like Maslow's hierarchy of needs, what I value separated by priority. To the right are my relationship essentials. Those are things I take very seriously but also can be very fun and free so Georgia font finds the best meat in the middle font and also coincides with the pyramids showing which relationship is most prioritized. To the left is the more hobby related pyramid which I made upside down to do something a little different with the readers eyes as well in Poiret One font because it's a little more creative. I made sure that the Cloud society is going along with the “fluffy” cloud so I made it also Poiret One font in a burgundy color to blend with the cloud. Cinematography comes across is almost like a stamp on the skillet which is how I feel about myself.

Repetition: I mostly played with repetition in color using the same colors in the skillet and macaroni in the colors of the words. As well in the Stanford logo to keep a consistent theme and make sure most of the aspects blended.

Worry About It: I mainly for this one just edited and edited looking at the piece in presentation form and trying too look at it as if I were an audience member. As well checking over the rules.