PDF to the transcript below. Plain text copy follows;

The scene opens with an establishing shot of a small gas station in the middle of nowhere. A familiar car is getting gas, one that the audience knows to be stolen after the owner was murdered by a man dressed in black. This man in black is known as Anton Chigurh, although his name has not been made known to the audience as of now. All we know is that the few scenes that we have seen of him involved the strangulation of a police officer and the execution of a stranger using a captive bolt/cattle gun. We the audience know that he’s dangerous and ready to kill at a moment’s notice.

We then cut to look inside the gas station store. On one end is the cashier and owner of the place, on the other is Anton. Neither paying attention to each other, with their gazes, focused on other things. Our cashier starts with simple small talk, asking Anton “Do yall get rain up there in Dallas?” The second the cashier asks this question, the mood shifts dramatically. Anton is now focused and alert, maintaining strong eye contact with the cashier. This question clearly has ticked Anton off. He did murder two individuals in previous scenes, the cashier knowing where Anton has been is an indication to Anton that the cashier may know more about his evil acts. The cashier’s attention is now directed at Anton, his face seeming worried and concerned. Take a look at this freeze frame here. It’s an over-the-shoulder shot, giving us an intimate view of these two characters’ conversations. We can see a lot of how each character acts and responds to each other from this angle. Focusing back on the cashier, the window behind him shines a bright yellow glow outside, giving him a warm and innocent aura around him. The lighting on the cashier’s face also paints over any semblance of shadows or darkness on the cashier’s face. The impression the audience gets is that this is the most kind-hearted old man who has just come to face the most dangerous man in this film.

We have a continuous back and forth between the two as the cashier tries to defuse the situation while Anton continues to confront the cashier. Anton continues to maintain strong eye contact with the cashier, with his gaze comparable to a death stare. The cashier on the other hand moves his gaze down repeatedly showing a sign of submission. “Is there something wrong? With anything?” We see Anton give a slight grin as if amused by the question. It’s here where the dangerous man in black decides to toy with the cashier, no longer seeing him as a threat but just a clueless and helpless old man. This is further emphasized in the next few shots. I’m sure you can see the problem there with that statement. Anton also picks up on this. Then we are given a closer shot of Anton as he sighs at how clueless this man is, followed by a close-up shot of the cashier and his confused and worried expression if it weren’t clear enough. Anton then asks a threatening question about when the man sleeps, to which the man answers honestly. We the audience right about now would be jumping and screaming for the man to shut up and stop revealing so much information to this killer, thinking that Anton is going to come back and kill this old man. The camera comes closer to the cashier as he continues to try and defuse the situation by cracking a joking remark and giving a heartwarming and charismatic smile. Anton is clearly not moved by this, as his cold menacing stare continues being held directly at the old man.

The shot of the crushed peanuts bag gives the sense of dread and impending doom, the way the bag crinkles is something I compare to a man struggling to keep themselves alive. If you have been paying attention, Anton was continuously eating peanuts from the bag. If we were to take is as the bag as a representation of the cashier, then it can be interpreted as Anton constantly eating away at the cashier until there is nothing left of him which he will then crush with his hands, leaving both the bag and the cashier gasping for life. It’s a subtle threat and one the cashier notices.

A coin toss is now deciding the fate of this cashier, as we the audience with prior knowledge of how violent Anton can be, as well as his implications of asking the cashier how much has he lost to a coin toss, tells us that this is life or death. This is further emphasized as the coin lats right next to the crumbled bag of peanuts. Accompanying the following shots is a quiet ambiance. This is the only time across the entire scene where music is used. This is to further the tension of this coin toss. It grows in intensity as we get closer to the reveal of the cashier’s fate.

As the conversation continues between them, the camera slowly pans closer to each character. The situation is getting more intense by the second and the audience is being pulled closer to that intensity and is going to be a part of whatever’s gonna happen next.

Only two words are said allowing the audience free from the tension and clutches of the scene, “Well done.” The music stops, and the cashier gives a sigh of relief as if he has been holding in his breath just like the audience. Anton continues to play with the cashier as he remarks about mixing the quarter with others in the cashier’s pocket. He leaves after giving an offputting but friendlier look. He is still a dangerous man and murderous psychopath, but here, fate has allowed Anton to show the mercy he rarely gives. The cashier stands none the wise to how lucky he is to encounter the most dangerous man in Texas and make it out alive through the toss of a coin.

REVIEW 1: REVIEW 2: The Rolling Stones says this about the coin toss. “And he has this little game he plays. Staring at the human species like a visitor from another planet, Chigurh flips a coin. Your choice of heads or tails might just save your life. Only don’t piss him off.”As Anton realises that the Cashier guessed the side correctly he has this face of disappointment, that he cant kill the cashier infront of him. It’s very subtle but plays to the psychopathic nature of Anton’s mind. With his Sinister games he plays with people he’s hoping to kill. Watching every movement with those cold, Unrelenting Eyes ready to pounce on the cashier.

With technology being an ever-growing and evolving field, schools must continue to evolve and grow with it. Science Leadership Academy prides itself on being a very tech-savvy school. It is here where technology is ingrained into the curriculum itself. However, there is always room for improvement when it comes to how SLA uses its technology.

With that, I took up the challenge to try and answer the question, “How can I improve the way SLA uses technology?

Over the course of several months, in answering the question of what can be done, you can see the results and final end product here. Thank you! 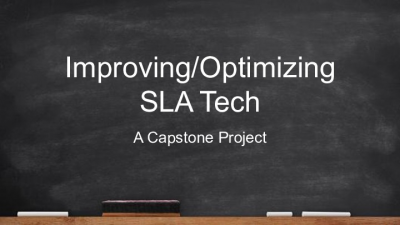 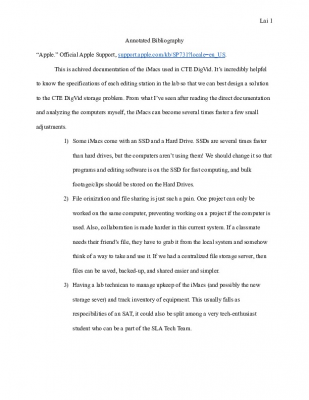