Amjed Washaha Mrs. Giknis English 1 5/20/2021 Social Media Impact On Sexually Based Cybercrimes In my last two posts, I covered social media’s negligence towards sexually based crimes. These crimes were anything from the distribution and sale of child pornography and the posting of unsolicited nudes from all genders and ages. We also provide photo evidence of online criminals interacting and advertising their illicit goods. We discuss statistics such as “child pornography of images had increased 1500% since 1988! Also, there was a 375% increase in the amount of child pornography websites between February of 2001 and July 2001. You can find the previous post here. The #megalink problem isn’t a secret nor is it located in a dark and inconspicuous alley somewhere on the internet. No, it’s right out there in the open for the world to see sometimes even appearing on the front page of Twitter. Twitter users are now trying to combat #megalinks by flooding the hashtag with photos and tweets unrelated to #megalink’s content. Many YouTubers are on our side as well. For example Youtuber “SomeOrdinaryGamers” made a 9 minute video explaining the situation. Feedback suggests that the video was rather successful gaining 968,421 views and 44,000 likes as of publication.
The attempts made by Twitter users against #megalinks are an easy and effective way anyone can help. It keeps the innocent distracted but may one day also move the #megalink community to other platforms. I also think the attempts made by Twitter users are quite humorous. You can often find memes and jokes when investigating. Here we see a user flooding the #megalink thread with something a little more friendly. Link from the Legend of Zelda series. Source: Twitter

YouTubers the likes of SomeOrdinaryGamers may also bring a lot of press to the situation. I mean 968,000 people is a lot of people, if they all shared the video once we could have millions of people that didn’t know about these disgusting acts of sexual assault, harassmet, grooming, etc… Sadly all these attempts aren’t nearly enough to put even a dent in the plans of the #megalink criminals. My agent of change mission was to stop this problem before it even happens. In my research, I’ve concluded that most of these criminals have suffered early childhood trauma or mental health trauma such as depression, anxiety, loneliness, etc… My idea is to implement a Peer Mediation program in SLA that will help students combat issues such as trauma or mental health issues. In order to make this happen, I’ll need the support of fellow SLA staff and students. I will assign trustable and reliable students hand picked by fellow advisors and staff. From there we plan on creating a safe environment for students to openly converse and socialize with fellow students. If this program goes as planned, students should leave the program knowing that they have added at least one more person to their lives that will always be there for them. I’ve worked as a mediator of other programs in the past and they went well in most cases. Getting in touch with the school counselor Ms.Siswick was rather easy and she was very cooperative and seemed genuinely interested in improving the wellbeing of SLA students and our community and for that, I am greatly appreciative. I have yet been able to complete my goals as of yet and the preparation and implementation of this program will begin in the 2021-2022 school year. I do believe that I have a solid plan and I can’t wait to put it into action. I really enjoyed this project even though I haven’t fully completed it as of yet. It pushed me hard and made me come to a realization of how bad the world can be sometimes. I learned a lot, statistics for these acts really shocked me. The number of child porngraphy can compare with the amount of legal porn out there which is absolutely disgusting and is a realization that I am constantly reminded of. I definitely could have made this program happen within this year but with the barriers, online schooling has imposed I didn’t feel comfortable having students talk about what could be serious problems over a screen, the fear of recorded conversations was a huge concern for me. For you, the people help us by contacting Twitter advertisers which you’ll find on the next page, and continue to flood #megalinks with appropriate content. Thank you to all of those trying to make a difference!

Amjed Washaha Mrs. Giknis English 1 22/3/2021 Social Media Impact On Sexually Based Crimes Hello, did you know that in 2013 researchers have concluded that the number of child pornography images had increased 1500% since 1988?! Also, there was a 375% increase in the amount of child pornography websites between February of 2001 and July 2001, just five months apart! Now imagine how high that number has increased with the new modernization of computers and cybersecurity. Now if you don’t see the problem here you aren’t blind you choose not to see. This inspired me to do my own investigation into this topic. As I discussed in my earlier post, Twitter the infamous social media platform know primarily for political nonsense and cancel culture has some serious issues with the exchanging and sale of unsolicited pornography of not only minors but adults as well. Adults that are ignorant to the fact that their private photos and videos are being sold and exchanged on sites such as Twitter, Instagram, and Facebook. With the amount of users apps such as Twitter have you would expect that moderation for things such as this would be good and looked after well no Twitter does nothing to fix this issue only if you report the user directly will Twitter do something. Well then report all of the accounts right? There are so many accounts that it would be impossible for me to do so and even if I do these accounts are what we call “throwaways” which are accounts that have to link to the user and can be “thrown away” at any time. After they are removed or throw away their account they just make a new one and start their operations up again. Source: Twitter Names and hashtags covered to prevent the advertising of illegal activities It doesn’t take much to fully understand what is going on here. But there are some things to explain like what does “S2R” mean, well it means “send to receive” this is a tactic these criminals use to obtain a greater stock but also make sure you are an actual buyer and not a cop or someone that is just trying to toy with them. Amongst other things we see one user state that they have 100 gigabytes of material on deck which for comparison is around 20,000 songs or in our circumstances around 200 hours in standard definition video or even 100,000 photos according to “Kenstechtips.com”. When you think about it this is one person amongst thousands in this world and he already has enough material to last him a lifetime. Now, do you see the problem?

If you have keen eyes you will see that all of these posts are very recent with the oldest being only made a day before this article was written (24/3/2021) and one even been made only nine hours ago. Source: Twitter

In this snapshot, I have made the decision to not cover the search bar. The hashtag “Megalinks’ ’ refers to an anonymous file-sharing application known as “Mega.nz”. I do not hold Mega.nz accountable for the actions we see displayed here as their services help small businesses and developers share data without the fear of the data being compromised. The reason I have decided to share this information with you is that I have come to the realization that anyone looking to purchase this crude material will go above and beyond to obtain it and it is quite easy to obtain information on this topic. From what we have concluded these accounts are “throwaways” and they share material using anonymous methods, the combination of these two tactics offers these criminals total anonymity. So what is being done about this issue? Nothing on Twitters’ part at least, Twitter hasn’t even issued out a statement on the matter. As of March 25th, 2021 the only action taken against these criminals has been mass reportings and floodings of the threads. Users will “flood” the hashtag “megalinks” with gifs and memes shaming the child pornography market as shown in the image below. Reporting doesn’t do much but this flooding tactic has a lot of potentials to help hide the users selling the nefarious photos and videos.

Here we see a user flooding the #megalink thread with something a little more friendly. Link from the Zelda series! Source: Twitter
What can you do? Even though users can make new accounts at anytime mass reporting can get the seller off the platform and make them move to more discrete and harder to reach parts of the internet. Although this might not solve the problem it will make it harder for first-timers to purchase and get addicted, it will also shield children from stumbling upon such vulgar media. Email Twitter, emailing twitter’s support center can help inform twitter of these criminals’ existence. If all else fails hit them where it hurts their wallet! Contact investors let them know what is going on in the company they have money invested into. And finally, be safe whilst doing research for this project I had to cut out many things for as it was too vulgar for a school setting I also stumbled unwarranted photos whilst looking through threads while the photo is down now I cannot say for sure if it was re-uploaded again. Thank you for reading let us make a difference! 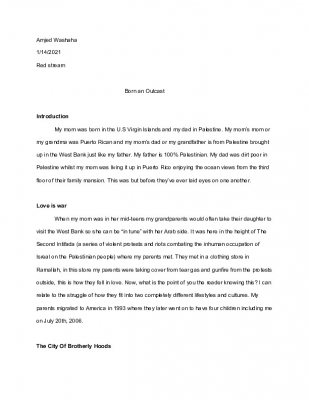 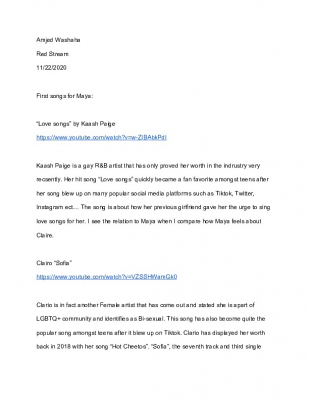 I started this project when it was assigned in my english class during the first month of my freshman year. It was a wild first year project but I expect nothing less from 2020. I created this piece in Philadelphia and the entirety of the story takes place here in philly, my home. The beginning of this pandemic started almost a year ago now so it’s hard to pin point exactly how my story began, but I can safely say it started as any normal cliche pandemic movie or book starts. “I never expected it to end up like this, but I guess we just didn’t want to think what this plaque could really turn out to be” Type Deal. If it wasn’t already obvious as to how my story relates to this, this story reflects on my thoughts and experiences during the pandemic. It encompasses the coming weeks before lockdown and how my school reacted to these sudden closings of schools through out the district. 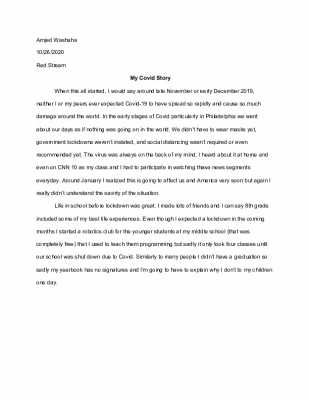