My capstone was the progression of running a business as a student amid Covid-19. I have the last year and a half worth of footage documented to provide photo evidence of an ongoing skill that progressed with time.

By December, 2016, the discussion of my highschool experience had come up while talking to my parents and we realized we better get a jump on trying to find a highschool for me if I ended up choosing to leave my old school, which I did. We ended up looking at schools such as Central, Christopher Dock, The City School, and Science Leadership Academy. I had shadowed Dock and TCS, and had noted the complete differences in lifestyle from a suburban type area to a bustling urban scene at TCS. I had like most of the schools and I had eventually set up a visit for SLA. In early 2017 I went to 22nd and Arch to visit the school building in the middle of the city. When seeing some of the classrooms in action we had run into familiar faces such as Charles Velasquez, Micah Carrera, and Amaris Ortiz, who were all kids of family friends. Looking back over the last 3 years I see that what had drawn me to SLA is gone. I remember being embraced by the colorful and creative community when I visited the school but now we’re in a cramped new building that’s unfinished, unsafe, and a lot less accessible than the previous. Although SLA is a great school it definitely has changed me and I’m not sure if it’s for the worst. I was a strong Christian and followers of christ leaving my Christian middle school. Transitioning from chapel and prayer twice a week to a school that’s completely accepting about any and everything was especially frantic, and without being constantly reminded of the word of God, I began to find myself slipping in faith barely reading my bible, attending church less, and slowly starting to question God’s existence. I wasn’t sure how SLA would impact me but that’s hardly what I was expecting. Maybe it’s hard to say that I wouldn’t have ended up like this had I stayed in my previous school, but we’ll never know, and that’s okay. I’m excited to see how I grow from here and see my future transition into college. I’m not sure where I’d go, but I know that I’ll be ready for it. It scares me to see myself go from being an advent follower of Christ to a person that ended up liking not feeling the responsibility to uphold God’s image. After 2 years without a bond with Reflecting on my first year of SLA is quite funny. I came in from a school that was quite strict to a laid back environment where much was tolerated and I began to lose my head. WIthin the first month of school I was almost suspended for putting my hands on another student in a manner that I thought was funny at first. That moment taught me a lot and although I regret what I did, I am glad it happened as from there I grew from that experience. Entering my sophomore year I began to grow both physically and mentally and I began to get comfortable as I entered my second year of highschool. I don’t remember much of it as it was a blur since it wasn’t much of memorable transitioning rather than continued education. Starting a new year is quite exciting. You’re a year older and a year closer to graduating. Junior year instantly showed me how much of a difference it is between it and sophomore year. Just within the first week I found myself already being challenged by the workload that was being given out; and as of now I got a better understanding of the workload i’ll be receiving all year. Some days I find myself reminiscing on the past. I often think back to when I had little to responsibilities and my day consisted of snacks and TV. SLA constantly shows me that I’m at the point in my life where I need to step up and prepare for the next phase in my life, adulthood. Just 3 years ago I was in middle school enjoying myself of the yellow school bus. Eventually I’d like to see myself at a point where I’m content with my faith, academics, and maturity; but that takes time and a lot of effort.

Posted by Douglas Oliver on Friday, June 1, 2018 at 4:59 pm
The element assigned to me was Argon. It's atomic number is 18 on the periodic table. Argon is a gas in our atmosphere that takes up about 0.9% of it. Its found in lightbulbs so I decided to make my print a lightbulb that was accompanied by a baseball bat that was intended to smash it. My process was just me trying different amounts of paint, and trying to make sure paint went where it was needed. If I were to print again I'd definitely would redo  the atomic number, realizing that the print made it backwards. But overall I definitely enjoyed the designing of the print.  I went through a few ideas and I liked the one I chose best.
Posted by Douglas Oliver on Thursday, April 26, 2018 at 10:04 am
​ Negative space is all of the space that is not used in a photo but is just as important.
All of the space that isn't focused on the subject defines the photo and emphasizes the main subject.
In my cut out, I used a cutting knife to trace out certain areas of an image. I then used the traces to visually show the negative space that was in the image the entire time.
Understanding negative space as an artist is a necessity as it helps to really understand if one's subject is truly the main focus of an image as everyone has different views on art.
Negative space does, in fact, enhance drawings as they give the effect to focus on the subject strongly in an image.
Posted by Douglas Oliver on Sunday, December 10, 2017 at 10:10 am 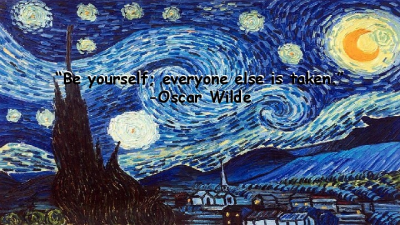 ​After hearing the constructive criticism given by my classmates and teacher, I made a few crucial changes to my slide. I decided it be best to remove my name from the slide all together. I found that it was a distraction and it looked messy. I kept in mind that it's nice to have lines that guide the viewer to what's important on the slide but we also learned that rules are meant to be broken, so I placed an image with swirls. I think it represents the my personality so I found an image that would show that.
In the new slide, I edited the font and presented my quote differently as well. I felt it complimented the image. From what I saw in class,the shadow drop added a nice look so I added it knowing it would make the words stand out. It also made it easier to read rather than one color such as black or white that matched the background. Without it, it'd be either be too hard to see.
I also kept in mind that it's easier to focus on the point of the slide when there aren't a lot of things covering the screen so I tried to keep it similar. Besides that I knew that if I did too much, it'd be a new slide rather than a remix. I had considered removing the quoter from the slide but if I did that then there'd be even more negative space then there already is. Once I had put these touches on, I realized it was a sharp, clean, slide. Overall, I feel these small changes helped professionalize my slide and increase my knowledge in design.
Posted by Douglas Oliver on Tuesday, November 21, 2017 at 8:38 pm 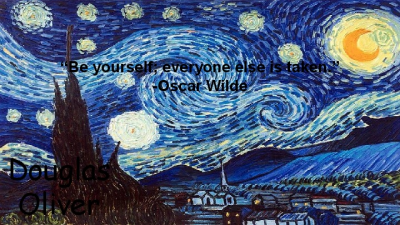 For my slide, I chose an image that was well known like Starry Night, by VIncent Van Gogh. I have a very explosive personality and I thought that the image showed that in a physical way. I also used black to contrast against the multitude of colors so it’d be as clear as it could. Big text was another thing in the slide I thought was nice because it caught the audience’s attention and gets straight to the point. The quote I chose spoke on individuality which I personally feel I show on a daily basis. Presentation wise, the image has a value of a flowing characteristic which directed the viewer’s eyes on the image.
Posted by Douglas Oliver in Spanish 1 · Hernandez · C Band on Monday, October 30, 2017 at 1:12 pm
In The Interview, Justine visits Eithana in her office, hoping to have an opportunity to study in South America.
Posted by Douglas Oliver in Technology - Freshman · Hull · d2 Band on Sunday, October 15, 2017 at 3:38 pm