Hey all! I’m Zeniah and for my capstone I founded a non-profit called Women4Women. I was motivated to prevent women incarceration by tackling issues in our neighborhoods that brought down young women. Originally, I had an event planned. However, I’ve been able to help women in different ways during C0-VID 19. I am still motivated to cultivating self worth and women empowerment especially during these hard times where one is found questioning one’s worth. Love yourself always! 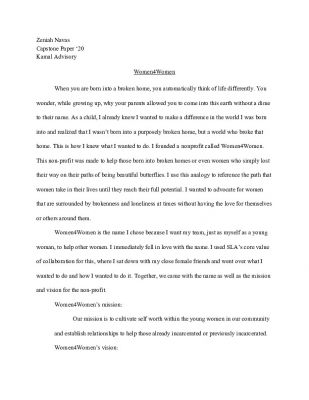 Posted by Zeniah Navas in English 3 · Block/Harmon · B Band on Tuesday, May 7, 2019 at 8:36 pm
​Introduction
I want the realization of double jeopardy in our country to be known. I want the hypocritical thinkers to realize what our criminal system is putting the black men through our country through, but getting away with. I want the generational cycle to end. I want our black men to be free from the any previous offense committed by their ancestors.
Double Jeopardy

Double Jeopardy is the prosecution of a person twice for the same offense. We’ve seen this brought up in the courtroom many times. It was created to stop the arresting and prosecution of men for the same crimes using the same evidence. However, it’s shifted into a facade, or front. Black men and minorities of this country are facing the same accusations/offenses with nearly the same evidence, in an instance, for nearly all of the crimes that we’re witnessing on the news or the media. Not only do they go to jail for the same reasons, but their brothers and cousins are all doing the same. We’ve failed to give them the benefit of the doubt and immediately think they deserve this. Our country has crucified minorities to the prison systems that have now created mass incarceration. When we really sit to think what may cause this, we blame it on the hoods. We blame the minorities who aren't given a way out for their actions. We blame the weed and the drugs for playing a role in these harsh environments. We do all, but blame the government, the police, and inequality itself. There's a clear role on how white supremacy plays into the ideologies police officers are told to heed by.

Minority men are not given the same privileges to maintain jobs or create careers for themselves. It’s a generational cycle that has been created by the white man during the 1900’s. A system where the black man has to fight ten times harder to make something out of themselves for their families. Although one man does it, it does not change the fate of the rest of their families. It’s all tied down to the government having their own preferences to who they seem to want and not want in their fancy housing developments or their private schools. These ideas of the black man being dangerous is the evidence being used against them in their everyday trials. When a black man applies to a job, he is being tried for the offenses of previous black men. When a black man applies to college, he is being tried for the offenses of not being smart enough or not having the capabilities to succeed. When a black man puts his hand in this pocket, he is being tried for the offenses of fear initiating the death of the black man. “You’re guilty until proven innocent” is a systematic phrase that’s being used to create excuses to keep them incarcerated until finally evidence is found. There’s over a hundred cases of men who have been in prisons or jails for more than 3 years over a false accusation. The list goes on with evidence tampering that affected these trials just to get a conviction. Not to mention the amount of money they have to pay for a good lawyer, but are stuck with a half ass public defender. Don’t get me wrong public defenders can do their jobs to the best of their ability, but imagine the amount of cases they are facing with minority men that are all facing the same charge; drugs, assault, attempted murder, etc. All of these cases are immediately attached to a black man. These ideas that are put into their heads to believe that it’s a black man who must of done this proves the double jeopardy that has been placed on their backs.

We see crime and we cry for our cities. All of America is fighting for this big change that can somehow make our cities and our neighborhoods safe again, but are not fighting the oppression that is being placed within our cities. We fail to realize that as minorities, we are being tried for the same offenses as our ancestors and will continue to fall short on the pedestal. Steve Early wrote, “1. Rewarding cops for connecting with the community, 2. Hiring for Diversity, 3. Partnering with activists and city groups, and 4. Staying away from guns” as steps in his article on police violence. (2014) As America, there should never be steps that we have to take to stop police violence. In the face of double jeopardy, black men are all convicted with one piece of evidence. Police? All seen innocent against the killings of black men. Why? Double jeopardy. White policemen have seen black men as a threat since the beginning, as soon as they attempt to put their hand out or make a movement it falls under “I thought they were grabbing a weapon”. Not only do we justify the killings with this one phrase, but Philadelphia has created Stop-and-Frisk allowing policemen to stop a car basically by preference. “As many as 20,000 people were stopped in 2017 without a justifiable reason,” is one of many statistics taken over the years since this has started. All statistics that prove to why we should not continue to allow this form of double jeopardy. They’re all being stopped from previous offenses.

To conclude, America has failed to stop their cities from conducting these malpractices and overlook the convictions that took a little too much like the other.

This art class continues to change my perspective of art for the better. The ability to be able to take your time while making art pieces so you can show yourself is impacting.. Throughout the course, I’ve learned how to do different methods of drawing, painting, and simply creating art. The first two weeks assignment was to create a bicycle drawing. The task was to draw a bike as if it was a real one. It was very difficult at first to not want to trace anything, but I was able to use my imagination to visual it. I decided to make my bike black and red because those are most common. I tried creating good handlebars, but it did not work out as planned. The way I made the circles so large was with a pan. I used different materials to make my bike. The next task was very fun to do. It was the “Optical Illusion”. I always enjoy being able to draw something that reminds me of my childhood, it’s something I love to do. I like it because art always reminds me of the little girl I once was who loved to color. I used a ruler and the outline of a brick wall to be able to do my optical illusion. I, used, another circular object to create the circle. I colored it in marker because I knew it would make it pop out more. We didn’t have to only create one, but two illusions. The first was my own and the second I had to follow directions. I paid close attention to the instructions to do it. I used a number 2 pencil for the shading. After this, we had to create an eye drawing.. This assignment was a little difficult in finding exactly how I wanted to do it. I knew I didn’t want to do something that looked basic. I researched eye drawings and found one I actually liked. I knew it was going to be hard at first, but I continued to use it as inspiration for my own. I drew it onto the the paper with a pencil and had to erase many times. I did it lightly because if it was dark it would not have came out how I wanted it to. I used shading to create that real eye effect. My last piece is really my favorite. It’s a wolf mandala. I really wanted to do something different because I knew others were going to be the typical circle mandalas. I drew everything with pencil and outlined everything with marker. It was more complex than I had originally planned. & Once again, this is me; Zeniah Navas.

Hey! This art class has honestly changed my view for the better. I see art so differently now, being able to take your time and making art pieces you are actually passionate about shows what art is meant to be. I have learned how to use multiple forms of materials to make these pieces. The first two pieces are blind contour drawings. The task was to draw without looking at the paper. It was very difficult at first to not look, but I soon got the hang of it. My blind contour drawings are simple, but I’m proud of me being able to step out of my comfort zone. The next task has to be one of my favorites. This was the “Choose your own painting”. I enjoyed this so much, out of all the things I could have painted I felt the need to draw something from my childhood. In art, I always like to incorporate a piece of me. I love Winnie the Pooh! He is such an amazing character, especially for younger kids. He really used to teach me how to be patient and loving. I decided to do him big because I wanted to be able to hang it on my wall. I drew him, outlined him with black paint, and continued to paint the inside. Once I finished, I was proud of how well it turned out. Afterwards, we had to “Recreate a piece of Art” . This assignment was a little difficult in finding exactly what I wanted to do. I knew I didn’t want to do something that everyone would typically think of. I researched graffiti and found one I actually liked. I knew it was going to be hard at first, but I pursued my idea. I, then, found one I liked. I drew it onto the paper with a pencil, used a black marker to outline the shading, and colored the rest with crayons. My next piece really touches my heart. It’s an illustration of a writing called “My Island” by Lee. I really wanted to do something that illustrates my island. This poem speaks on so many things that I am very passionate about towards my island. I drew everything with pencil and simply outlined everything with a marker. It was simple, but I believe once you know the backstory it will touch you. The last assignment was to take a picture and edit it. I did a simple water bottle photo. The edit was simple, but it looks really cool. The fading of the bottom and top of the bottle makes it has a very nice effect. & Once again, this is me; Zeniah Navas. 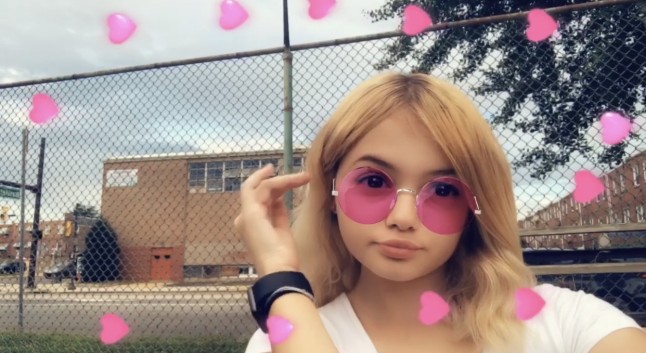