A Unique Point of View of Poverty 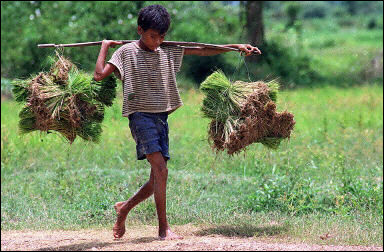 A young child carrying grass for cattle. These are usually odd jobs any child can do for miniscule amounts of currency.

In my previous post, I introduced you to the topic of poverty in Cambodia. I provided immense research and information of why it's such a prevalent problem in the country today. One such factor was the effects of wartime, and another one is because of the deteriorating quality of education present in the country. After conducting a bit more research, I found out that the rate of poverty fell by almost 30% in recent years. In 2004, it was a high as 50% in the nation, before dropping to an astonishing but still troubling 24% in 2014. If the data was conducted in 2018, I would predict that the poverty rate would be around 13% if the poverty rate fell by 3% each year. As stated in my other post, Cambodia is backed by money from foreign aid. In my new research, I found out that such countries include the United States, and China. It is said though that China only looks at the potential resources and business that the country can offer, rather than pouring money in for the sake of human rights and living conditions. Over 70% of the country with a population of 15 million is under the age of 30, which is staggering for a country infested with poverty. 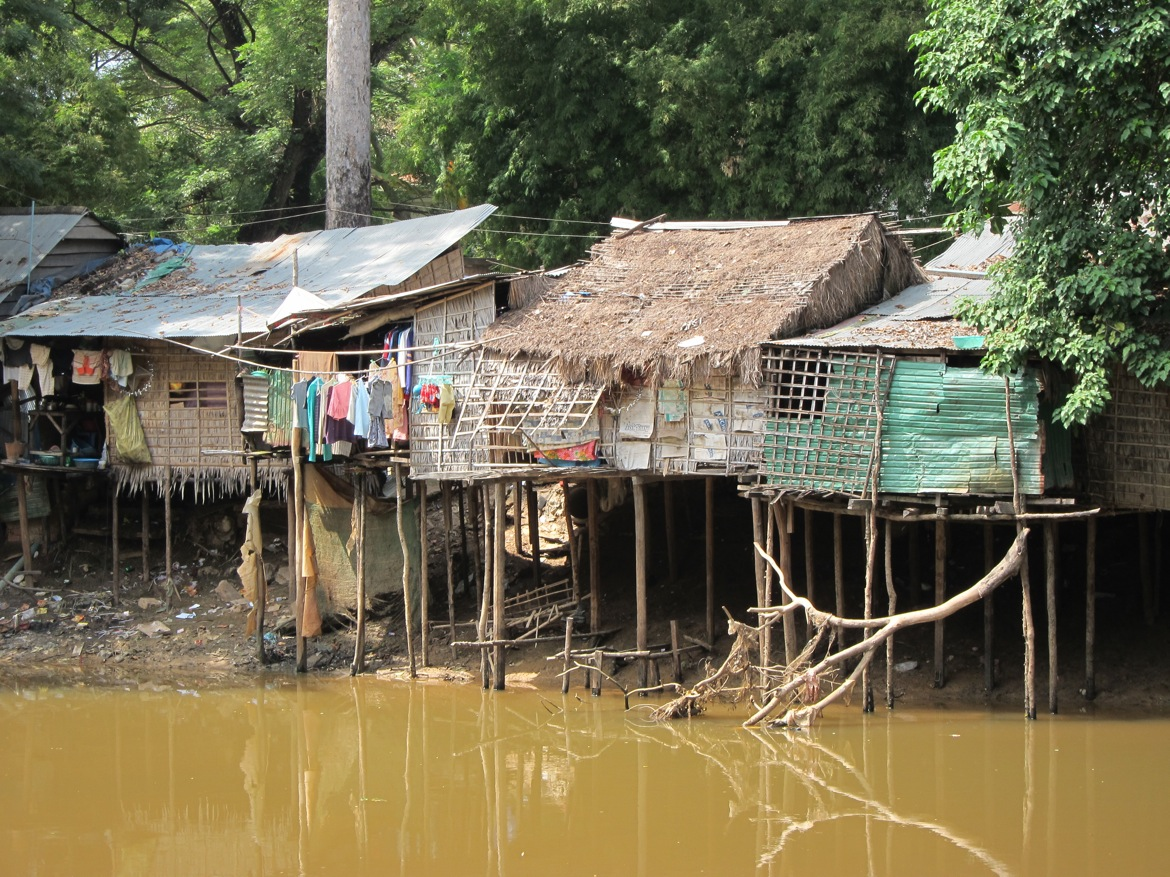 Houses on stilts that are deployed along the river are common sights to see in these kinds of areas.

Also related to the new information I found while conducting new research, is that while poverty is mostly in the rural areas of Cambodia (such as the countrysides and so), it is also beginning to appear in urban areas as well. Cities like Phnom Penh (the capital of the country), or Siem Riep (home to Angkor Wat), are slowly starting to see poverty rates rise. In my opinion, this is especially alarming because these are big cities and you should see people going to work and having conversations about the weather, not people begging for spare change on the cobbled and musty streets of Phnom Penh. The last piece of information that I found is that more than 25% of all households are led by a single mother, due to the wars and strifes that have occured during the nation’s bloody history. Combined with the existence of poverty, and an high rate of uneducated unemployed women, they often have to turn to the sex industry, which is another yet unofficial source of income for the economy. Due to this, there are a lot of question marks to whether or not the government should do something about this. 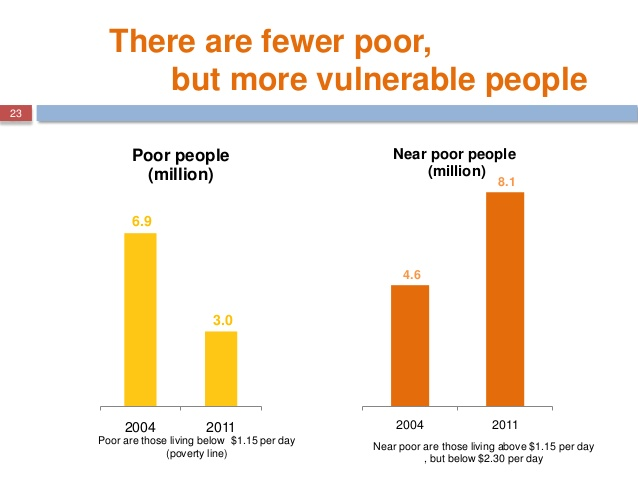 This graph shows the comparison between people in poverty and people who’s on borderline poverty. As you can see, the rate of poor people decreased, but the rate of people who are endangered to becoming poor is astonishingly high in 2011.

For my original research, I conducted an interview with my father. I produced a total of 8 questions, all relating to my topic. There was a lot of reasons for interviewing him such as time, accessibility, language barrier, and etc. But the main reason was that he is a person familiar to the country, with him growing up there himself. He to me is considered someone who lived through poverty. From my interview, I learned many things about him that I did not know or I knew but very vaguely. For example, my first question asked about how it was like growing up for him, and he responded by describing the hardships he had to deal with growing up. One such example included him saying that he would have liked to go to school, but instead he had to focus on working in order to provide for his family. A similar pattern I saw in his responses is that he believes no jobs and the government not caring are the main reasons to why poverty is so prevalent in modern day Cambodia. This leads me to believe that in order to extricate the root of the problem, the government must listen to their people more and there needs to be more jobs with higher paying salaries. These are huge additions to the understanding of my issue and I believe that learning from a person who’s gone through the same things as people I’m researching is invaluable to my knowledge. My personal opinion on poverty has not changed due to the interview, but rather it has strengthened. My opinion is that poverty is a major issue, and if it's not fixed soon, then the future of Cambodia as a nation looks grim and bleak. With this interview, this just confirmed my opinion and there is nothing that can even remotely change it. 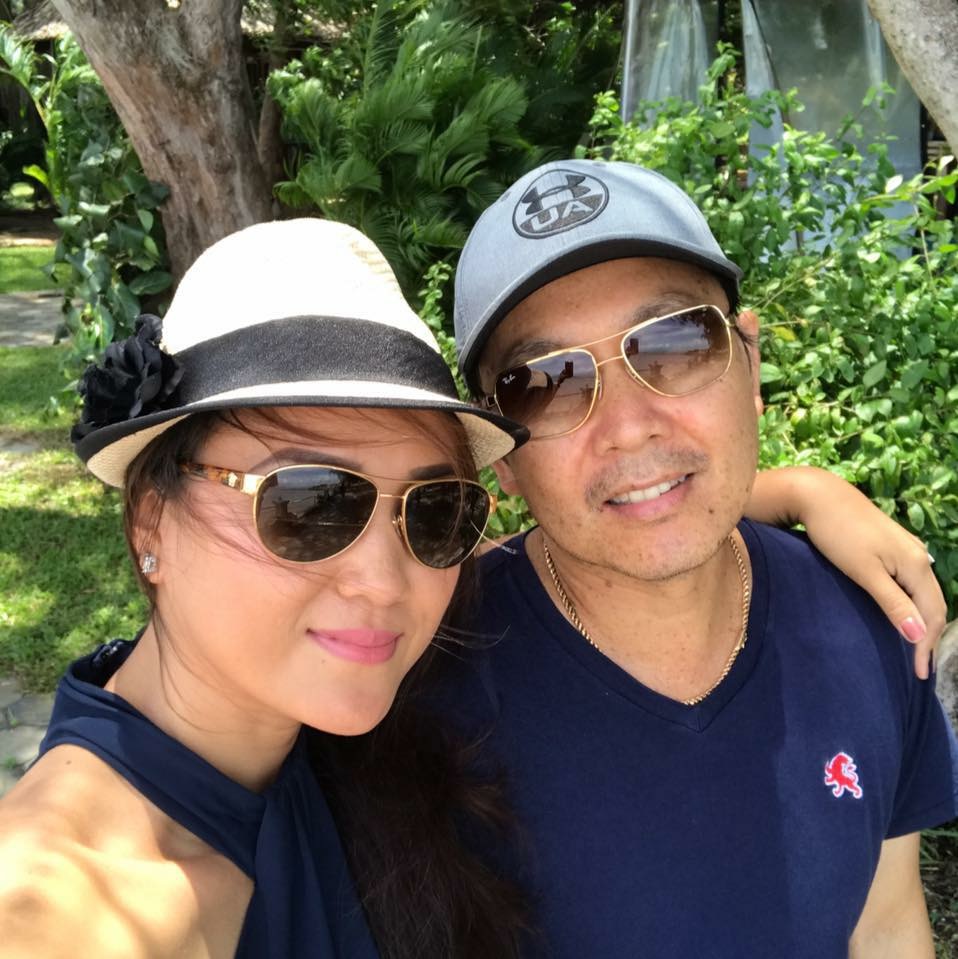 Here is the person I interviewed, which is my father who is pictured alongside my mother.

This brings my Original Research post to a close. I hope you find the interview interesting as it takes you to a point of view that is told by a person who experienced poverty first hand. Now for my Agent of Change, I plan to send at least 10-15 care packages filled with various amenities and cash. Said various amenities could include, travel sized bottles of toothpaste, shampoo, or instant foods such as ramen noodles or other various instant foods. Monetary values could range from $10-15 dollars which may not seem like a lot, but one  U.S dollar is worth 4000 Cambodian riel and most items in Cambodia such as clothing and food can be worth from around 2000-300 riel, which is a huge bargain. These will be delivered to my lesser relatives in Cambodia who I hope will appreciate it. This plan is tentative for now, but this is just a general idea of what I am planning to achieve for my Agent of Change. Thanks and remember, you can make a big difference to save Kampuchea ( កម្ពុជា)!

Take a look at my annotated bibliography!

Your post is well written and very detail. I think you should stick with your idea doing a care package.

Peter this a great post ! Your agent of change is a great idea of hopefully you'll save lives

Your agent of change is a fantastic idea. Care packages would mean so much and help a lot.