A connection that influenced me is how connected he is to his city Johannesburg. It interests me how much he learned from living there and the details about Johannesburg that he put in his writing that made it sound so special. It influenced me to tell a story where I can go into detail about what it’s like to live where I was born, West Philadelphia. Not only did it influence me to do that but it also made me want to tell a story about the identity and culture that I’ve come to learn that was built by my community, and for Noah, this was Johannesburg. Trevor explores his identity through events that happened in his life. One event that resonated with me is when he took a second thought on whether he should sell a camera that was stolen. The thought that he had was there’s someone that is being affected by all the photos and memories connected to the camera and if it’s sold then those photos and memories are erased. Trevor said, “ We live in a world where we don’t see the ramification of what we do to others, because”. This showed Treavor’s unselfishness by putting other people’s emotions and feelings over the money that he would receive. The way Noah used dialogue in his writing resonated with me. I love the way he incorporated dialogue in his writing to make readers want to read more. This was something that I wanted to incorporate in my writing because I want to interest readers and make them want a sequel to the story, just as Trevor did in his writing. The way Trevor’s story is told, there’s a clear idea of what’s going on from the rising action to the falling action in that chapter. I wanted to create a vivid image for readers with my storytelling from beginning to end of the vignette that compares to his storytelling. I did not choose to use humor in my writing. Sometimes I like to use humor and I consider myself pretty funny, but for this vignette, I wanted to leave out the humor because sometimes I feel like it takes away some ideas in the stories that I want readers to see. I broke down what this culture looks like to provide images for an outsider audience so they could imagine what this culture would look like. My vignette addresses the essential question of what it looks like to be a part of a community and most importantly a culture. 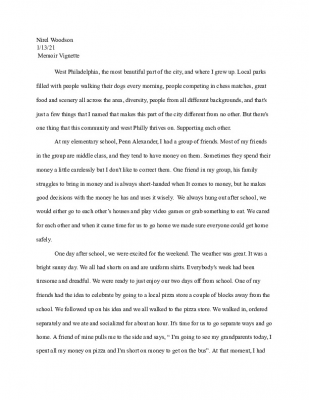 I really liked this story, Nirel. Not many people are willing to do what you did for your friend, so I appreciate that. Your community sounds awesome. Good job! :)

Seems like a very caring community. It's cool how it makes such a big part of your identity.