Posted by Marcin Czapla in Technology - Freshman - Hull - y2 on Sunday, December 13, 2015 at 6:32 pm
1. What I learned from the critique of my slide was that simplicity is sometimes better then making something more complicated, and since my slide was very simple they enjoyed that aspect of it, so I decided to keep it that way. Something I did learn while presenting though was that I should pick a different color soccer ball, or one that would not blend in with the background since it was hard to see. One more thing that I was told to change was the way my word were placed. I was told to make them outline the soccer ball, so that it would look nicer.
2. The reason why I decided to make the soccer ball have a black outline is again, so that it would not blend into the background. The reason why I decided to make the words that describe me outline the soccer ball was to make it more aesthetically pleasing. 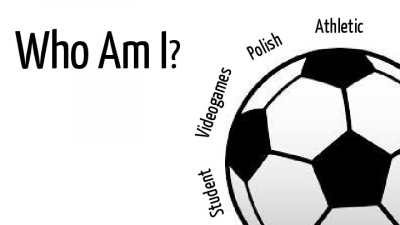 ugh what is this