I remember Christmas in 2007 very vividly. I would have just turned 7 years old by this point, and I remember this day as a time where I was flooded with a rollercoaster of emotions. Like most children, I was extremely excited the night before Christmas. With Christmas approaching fast, the excitement I felt from wondering about what gifts I’d receive was so high up through the roof, I knew Santa Clause would be able to feel it as he passed from house to house delivering presents to all the good boys and girls. The Nintendo Wii was the hottest thing at the time, and I just had to have it. I asked my mom for it some time ago, but it was sold out nearly everywhere. The expectation was that Santa Claus couldn’t disappoint. He never did before. My mom always got me what I wanted, but Santa Claus got me what I wanted and more. Christmas was my favorite day of the year and nothing, and I mean nothing, was going to ruin this day for me.

I was up early Christmas morning because my brain wasn’t going to let me lose any time during this glorious day. Getting out my bed, I felt like a champion from Sparta. I rushed down the stairs, with the cheesiest smile on my face. When I got downstairs, I couldn’t believe what I had seen. One gift and it was a sweater! What did I do wrong? I didn’t know what to do, but I couldn’t contain my sadness and disappointment. I had a good report card, but what I could have done to deserve this. I rushed upstairs to my mom’s room crying, asking her what was wrong. Surely, I should have received something I liked. My mom brought me downstairs and “explained” to me what was going on. She told me that I needed to go upstairs and pray that Santa would come back. She told me I was a good kid and if I prayed hard enough, there’s no reason I wouldn’t receive have any gifts. So I went upstairs and prayed my ass off. I cried and prayed until my mom called me back downstairs. I had zero hope anything would be there, but to my surprise, there was a Nintendo Wii and much more. My mom stood there by the tree, with the most “surprised” look on her face as I dived into my gifts. I couldn’t fathom what had just happened. Truly at the time, I didn’t want to know. An important lesson I learned this day couldn’t be summed up in words, but at this moment in time, I was simply grateful.

I chose to emulate the Atwood style of letting the readers know exactly how the narrator felt. With the story I chose to tell, I felt that vague about the character’s emotions, feelings, and most inner thoughts would not do the narrator, the reader, or the overall memory any justice. The scenes in the Handmaid’s Tale where the readers knew how Offred felt while still being able to follow along with what was going on felt really coherent to me. I felt that going with a light-hearted story such as this would make this process easier. 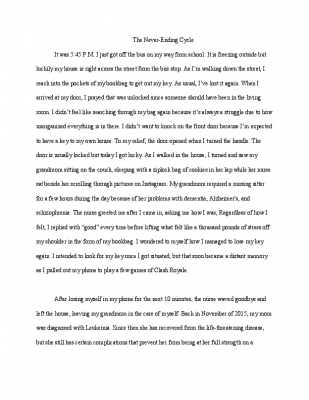 Choosing leaders in almost every way is some form of a popularity contest. Whether it’s  the presidential election or a dozen boys choosing a leader while they’re trapped on an abandoned island, what someone looks like and how likable they are almost always plays a role in the final outcome of the vote. The Lord of the Flies is a novel about a group of young British boys that are left to fend for themselves after they crash on a deserted island in the Pacific Ocean. The boys in Lord of the Flies turned what was their most crucial decision in the entire book into a popularity contest without thinking too much about their decision and the consequences of it The boys did not choose the leader of their group based off of who was qualified but off of other criteria. These fictional characters are not the only ones who can fall victim to this -- it happens in real life as well. People choose leaders not based on their qualifications and experience but on their appearance and charisma.

After a short time on the island, one of the boys, Ralph, suggested that the boys vote for a chief so the group would have a leader that would be able to decide what the boys do next. The boys end up choosing Ralph but how they came to a conclusion so fast, considering everyone just met each other, is very interesting. A quote that captured this moment is “None of the boys could have found good reason for this; what intelligence had been shown was traceable back to Piggy, while the most obvious leader was Jack. But there was a stillness about Ralph as he sat that marked him out: there was his size, and attractive personality, and most obscurely; yet most powerfully, there was the conch.” (22) At this point in time, none of the boys know each other well enough to know what the others are fully capable of doing and accomplishing as the leader. From the boy’s standpoint, it's obvious very early on that Piggy is intelligent and Jack seems fit to be a leader. However, it would seem as if they chose Ralph without much thought since the narrator says “None of the boys could have found good reason for this.” However, the narrator goes on to describe some of Ralph’s characteristics. “His size and attractive personality” are among the things “that marked Ralph out.” It would make no sense for the boys to choose Ralph over Piggy and Jack unless their criteria for choosing the leader was not based on who was qualified for it but on what they looked like and who they liked the most. Ralph was also in possession of the conch, who the boys associate with power when the voting process began. It is very clear that it was Ralph’s image that won him his role as leader. Also, the boys did not take Piggy very seriously because of how he looked. Piggy was described as the “fat boy” (7) after Ralph, who was described as the “fair boy” (7) for his British good looks and attractiveness. The boys also mistake his name for “Fatty,” (21) before Ralph tells them that his name is actually Piggy. Jack is not considered attractive either. According to the narrator, he is “tall, thin, and bony.” (20) He’s redheaded, and “his face was crumpled and freckled, and ugly without stillness.” (20) Considering the nature of the boys at the age they are, with most of them being twelve or younger, it is understandable to see why they chose Ralph over Piggy and Jack. In the mindset of an immature, pre-teenager, fat people are a joke and redheads are these evil, mean beings. Ralph is also a very good looking kid compared to the others who wanted to be the leader. Human nature explains why Ralph was chosen as it is normal for people, especially children, to gravitate towards who or what they consider attractive. Charisma is another one of Ralph’s traits and charisma is an important trait of a successful leader.

In the real world, attractive people, in general are more successful. Studies have proven that attractive people are hired sooner, promoted quicker, and are paid more than their co-workers than their less attractive co-workers. According to Daniel Hamermesh, professor of economics at the University of Texas, people who are considered attractive earn about 3 or 4 more percent than people who aren’t considered attractive with below average looks. A study published in Psychological Science showed that people played closer attention to people who are more attractive. One of the researchers said that this is because people are generally more motivated to pay closer attention to more attractive people because of curiosity, desire for friendship or a romantic interest, or social status. A quote from one of the researchers, Prof. Jeremy Biesanz, UBC Dept. of Psychology, is “Not only do we judge books by their covers, we read the ones with beautiful covers much closer than others.” This is similar to how the boys in Lord of the Flies chose Ralph as their leaders because it was not Ralph’s experience or intelligence that earned him the leadership role, it was his attractiveness that earned him the role.

Like attractive people, charismatic people are also very successful. Charisma is defined as “a personal magic of leadership arousing social popular loyalty or enthusiasm for a public figure (as a political leader) and “a special magnetic charm or appeal.” Successful people are usually leaders that possess the quality of charisma. Charisma is necessary for success because, without it, it is harder for you to get the people around you to help you achieve your goals. Leaders are essential for humanity, and charisma is what drives people to those leaders. While a good leaders possess intelligence, experience, and qualifications for the task at hand, this is not necessarily the case for every charismatic leader. Donald J. Trump, the 45th and current President of the United States is very charismatic. However, prior to becoming the President, he had never run for office in any kind of capacity. Nonetheless, he was a very successful business due in part to his very charismatic, and somewhat charming personality. Donald Trump is a very controversial figure, and although he lost the popular vote against candidate Hillary Clinton, Trump still managed to persuade almost 63,000,000 people without having the slightest experience in the world of politics. A similarity can be drawn to Ralph in Lord of the Flies when Ralph was selected as the leader without much experience as being a leader. However, like Trump, Ralph’s charisma was one of the reasons why he was chosen to be the leader.

In conclusion, there are many examples of people getting ahead of others because of their attractiveness and charisma. In the real world, people tend to favor charismatic and attractive people and this is why these kinds of people are very successful. At the beginning of Lord of the Flies Ralph is successful because he looks powerful, strong, and has an attractive personality. It is not uncommon for charismatic and attractive people to have intelligence and experience, but more often than not, people who display their charisma and attractiveness are more successful. Usually, they are chosen to be leaders over people who are not. 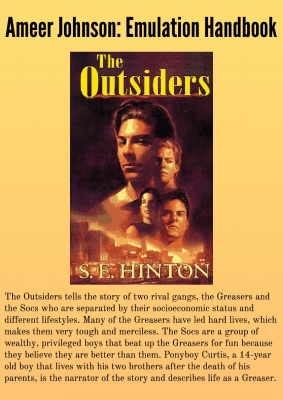 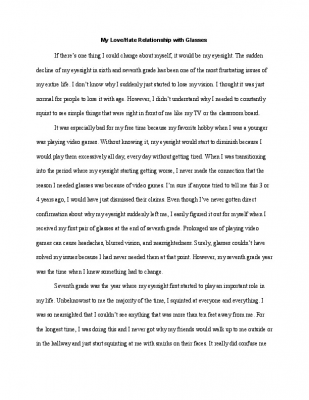 Posted by Ameer Johnson in Technology - Freshman - Hull - y2 on Tuesday, January 19, 2016 at 6:20 am
Posted by Ameer Johnson in Spanish 1 - Manuel - B on Wednesday, January 13, 2016 at 11:00 pm
Hectora- Español Video
Posted by Ameer Johnson in Technology - Freshman - Hull - y2 on Friday, October 16, 2015 at 10:40 am
​My home network is composed of a Verizon FIOS router that is connected through a coax cable from the bottom of my living room floor. That router connects wirelessly to every device in my house. I have 2 smart phones, 2 game consoles, one handheld, a printer, and 2 laptops that connect to my router. I learned a lot of stuff about the internet and home network. One of the biggest things I learned is what the difference between a router, a modem, and a modem-router was. Prior to this, I had no idea that they were different things. If I had to tell someone something about their ISP/Home network, I would tell that person that everything you do on the internet is tracked and so technically, you don't have any privacy online.