Posted by Saul Salas in American History - Jonas - X on Thursday, March 26, 2015 at 10:49 am
​Le infograph shows the interest and reason why the U.S. invaded the island of Puerto Rico. The actions conflicted on it caused Spain to do that was originally involving just with Cuba because of a American ship exploded, which was called the Maine, and because of that, the U.S. saw this as an excuse to conquer land to invest money and build military.
I did this because I liked Puerto Rico and wanted to know a bit more about it since I go there.
>>CLICK ON THE PICTURE TO EXPAND<< 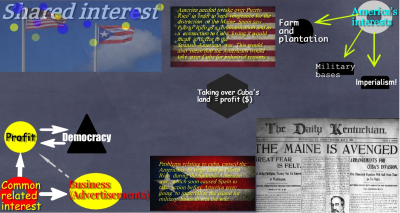 I think it is interesting how you used arrows to display the connection between the different aspects. At first organization of the infographic confused me, but after I made sense of the set up I was able fully appreciate the information on it. This clearly shows your understanding of U.S. involvement in Puerto Rico.

I like your infographic. It is very original and unique— its design is one of a kind. I like your use of shapes and flowcharts in it. However, I think it's not always clear what each picture or shape is showing and that the graphic lacks some structure and form, so I almost don't know where to begin when reading it and where to go.

This info graphic is very informative. It sums up what we learned during class.