Posted by Tomy Fleurine in American History - Jonas - X on Monday, August 29, 2016 at 5:18 pm
For the first part of this assignment I created an article and for the second part, I thought it would be creative to have cartoon demonstrating how the children would have felt if the contents of my article actually happened. Below is a bibliography of the sources that I used.
"List of Cities and Towns in Russia by Population." Wikipedia. Wikimedia Foundation, n.d. Web. 04 Feb. 2015.
"Newspaper Titles." Newspaper Titles. N.p., n.d. Web. 04 Feb. 2015.
"SUFFOLK HISTORIC NEWSPAPERS." SUFFOLK HISTORIC NEWSPAPERS. N.p., n.d. Web. 04 Feb. 2015.
"1839 in the United States." Wikipedia. Wikimedia Foundation, n.d. Web. 04 Feb. 2015.
Posted by Tomy Fleurine in American History - Jonas - X on Friday, March 27, 2015 at 12:00 am
During the research I found out many interesting things, for example I learned that there was often issues in Nicaragua because of the mindset that so many of the presidents had. They thought that they could have dictatorship over the country, over the nation and the people were not at all going to agree with that. That caused a constant change of person in charge. Furthermore, I learned that the United States were very involved in helping to make these decisions as if Nicaragua was their own country. The United States were very controlling and caused Nicaragua's situation to worsen. Enjoy my infographic.
Posted by Melissa Alvarez in American History - Jonas - X on Thursday, March 26, 2015 at 11:23 am
Due to social, political, and economic instability in the country, and rising tension with Haiti, the United States began a military occupation of the Dominican Republic from 1916 to 1924. During this occupation, the effects were mainly positive and order was restored throughout the Republic. The budget became rebalanced, the debt soon decreased to none, and economic growth rose widely. Some strongly opposed the occupation and the United States spent a number of years at battle with guerilla forces during their time there. After proposing The Harding Plan, and a new presidential election on the island, the Dominican Republic resumed control of their own land once again.
Check out my infographic here!
Posted by Anna Sugrue in American History - Jonas - X on Thursday, March 26, 2015 at 11:10 am
​The CIA Tibetan Program, otherwise known as the CIA's "secret war", was a series of CIA missions conducted between 1951-1972 to aid the Tibetan resistance against Chairman Mao and new Chinese communists. The CIA trained Tibetan operatives, operated intelligence programs, and conducted routine air drops into the Tibetan region to train Tibetan soldiers and battle China. The program gives very interesting eastern perspective on the Cold War and the ongoing conflict of America v. Communism.
See Leo's post for the infographic.
Posted by Imani Weeks in American History - Jonas - X on Thursday, March 26, 2015 at 11:01 am
https://docs.google.com/a/scienceleadership.org/document/d/1Y1uT_aYOxKRQq-zVEwrzoS0ER2f0iBX43X8ka50t8iU/edit

This info graphic is mainly about the U.S and the way they take control over everybody and everything. They use war to scare people into doing what they want and use money to wave their power in people faces. I have a tiny paragraph that states what they did to Puerto Rico and Guam, but I wanted the pictures to show how they did it and what they used. 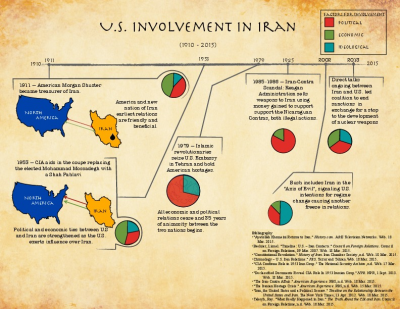 Between the years 1911, when an Morgan Shuster (an American) was made treasurer of Iran, and 2015 the relationship between the U.S. and Iran has been constantly evolving and altering. I was interested in exploring this political tie and this large spans of time because of its complexity and overall impact on both of the nations. Covering these 115 years reveals how drastic these changes actually were and the motives of the U.S. over the past century, which are displayed in the infographic.
Posted by Esperanza Gonzalez in American History - Jonas - X on Thursday, March 26, 2015 at 10:55 am
So for my infographic I decided to have bullets going one direction to represent arguments, and bullets in the opposite direction for counter arguments. I thought of having both arguments from the Mexican American War to kind of understand each story from both countries. I didn't just want to represent the pros of the war, but also the cons. 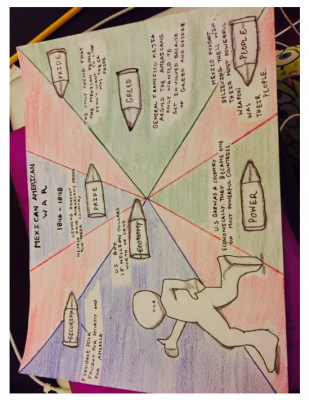 Posted by Nicholas Lepera in American History - Jonas - X on Thursday, March 26, 2015 at 10:54 am
In this info graphic I analyzed the economics of WWII, and how America's focus on the war differed drastically in comparison to other nations.  This war was an important part in American history during a time where isolationism garnered much support.  The effects of the war immediately damaged many economies, dealt a major blow to human life, as well as property damage. However, within the United States this war resulted in an economic boom that allowed America to exit the economic depression it had been in since the 30's. It also gave various settlements in lump sums of money to countries affected. Another result was the independence of many once occupied nations and areas. Areas such as Poland, France, and others were liberated or freed entirely, and Japanese forces in China were forced to withdraw.
The image must be magnified on your part. I am sorry.
Posted by Tenzin Chemi in American History - Jonas - X on Thursday, March 26, 2015 at 10:54 am
U.s. and china        Economic Relations | Create infographics
Our info-graphic will teach you about some of the history between America and China's economy. There is also some interesting facts and statistics that you might not have known about. I don't fully remember how Me and Hannah came to this topic decision. However, this topic related with the spanish american war and the conquest of Philippines which helped us get started on what and what time period we wanted to focus on.
Posted by Javier Peraza in American History - Jonas - X on Thursday, March 26, 2015 at 10:52 am
My info graphic shows how the U.S. went to war with the Pathet Lao and kept it secret for twenty years. I picked this topic because it shows how the U.S. takes advantage of other countries in foreign involvement (the people of Laos repayed America by letting us bomb their country side in search for Vietnam military bases). Refer to Zoe's for picture.