For my last two posts, “Illegal Animal Trafficking” and “New Information on The Illegal Animal Trade” I wrote about illegal wildlife trafficking and everything I had learned about it. I found out about the magnitude and consequences of animal trafficking, the conditions animals are kept in when they are traded around and about how animals that are endangered are more valuable in the trade since they are rarer. I also talked about my interview with the Vice President of the Wildlife Conservation Society, Susan Lieberman, and how the laws on illegal animal trading are too lenient. I now continued my research to the next step of the You and The World Project, my Agent of Change, where we have to actually make an impact on our topic.

For this post, I wanted to learn about what was being done to combat this issue. I knew about big organizations like World Wildlife Fund (WWF) and Wildlife Conservation Society (WCS), which I previously talked about on my other posts. The WWF is educating people about illegal animal trafficking and trying to make sure legislation is followed. Also, they “research illegal wildlife trade routes, the effects of wildlife trade on particular species and deficiencies in wildlife trade laws. This information is essential for CITES (Convention on International Trade in Endangered Species) and supports new plans for confronting illegal wildlife trade.” They do this to make sure stricter laws will be put in place to protect animals. During my research, I also discovered a new organization called Conservation International (CI) who is working to help animals that were trafficked and prevent wildlife threats. There are many organizations working on preventing illegal animal trading and hopefully with our help they will be able to stop animal trafficking. 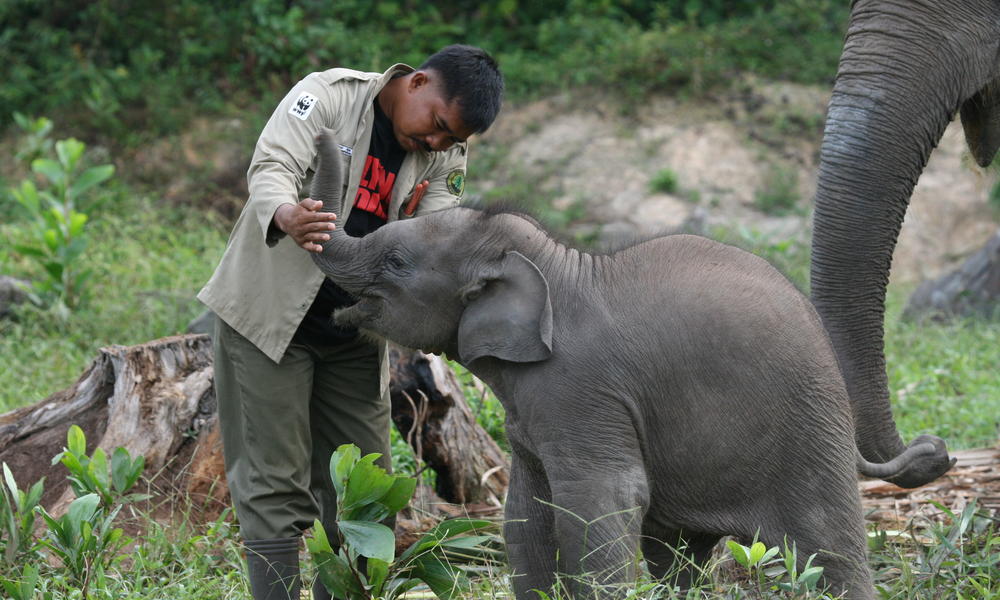 WWF member with a baby elephant.

For my Agent of Change, I was not sure what I wanted to do for it in the beginning. I finished my last post with the idea of maybe creating a poster to inform people about the illegal animal trade. After getting feedback from my peers and teacher, I decided to create a poster to place all over my school (SLA) Philadelphia so that people could learn more about the issue of illegal animal trafficking. My hope is that people will become as captivated with this topic as much as I have and will learn all they can about it as it is not a well-known topic. I also hope that the people who read my poster and even my posts will share their knowledge with others to spread the word and help animals. 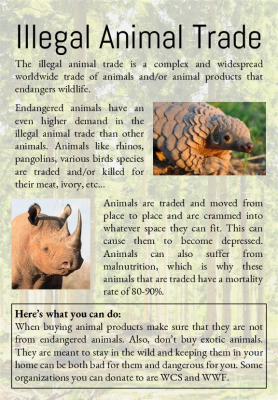 Even though I had created my poster and gave people the opportunity to learn more about the issue, I still wanted to do more. After doing more research on the websites of big organizations that work to help protect animals, I found symbolic adoptions on the WWF website. I had heard about these before and instantly became interested. As I learned more about the adoptions, the question of what animal I would adopt appeared. I filtered my search results on their website to find the most critically endangered animals. Then, I decided to do some research to see what the most endangered animal in the world was, the Sumatran Rhino. Rhinos are greatly affected by poaching and their habitats are also being torn down. There are also only about 300 Sumatran Rhinos left living in the wild. It was the perfect animal for me to adopt. From adopting the rhino, I received a picture, an informational card about the animal, and a printed and online adoption certificate. The money from the adoption is used to help fund their organization (WWF) and help them to protect wildlife. I was particularly excited about adopting an animal especially since I had wanted to do something like this for a long time. I think it is great that people can make a change in this way. I will forever cherish my rhino and remember about illegal animal trading and how even though I am only one person I can make an impact in the world. 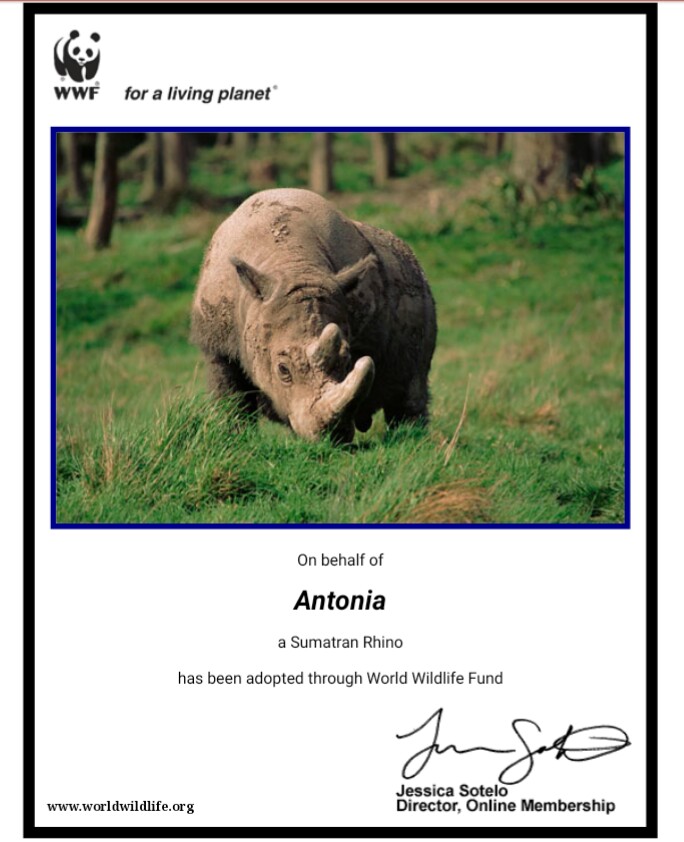 My adoption certificate for the Sumatran Rhino I adopted.

The illegal animal trade is an issue that I didn’t know much about in the beginning but I am happy to have picked. I came into this project not knowing what I wanted my topic to be. When I got the idea to do illegal animal trafficking, I barely knew anything about it. I learned so much from doing this project and from seeing other students’ projects. This evolved so much as I continued the project because I was able to learn about the many layers of my issue. I saw the horrifying images of the results of illegal animal trading, I even had the chance to interview an expert on the subject. I think that I could have managed my time better during this project, but overall I am really happy about how it turned out. This project has been a journey for me and I hope you have enjoyed my posts and will take this knowledge to help make a change because I know I will.