Posted by Jasir Chavis in English 1 · Giknis · D Band on Monday, March 19, 2018 at 12:44 pm
In my previous blog post I discussed one of the many problems today currently in the world which is Police Brutality. Part of my original research was to go out into the world and gather our own information. I was given the opportunity to interview Officer Mitchell of the 12th district who I was fortunate enough to interview in which he said the following: 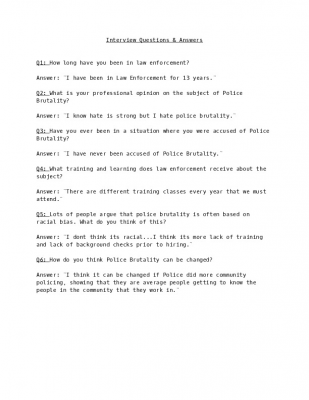 I found this Interview to contradict the normal norm of how many people see Police Brutality you see that for question 5 the question was, ¨ Lots of people argue that police brutality is often based on racial bias. What do you think of this?¨ to which he responded, ¨I dont think its racial...I think it is more lack of training and lack of background checks prior to hiring.¨ I found Officer Mitchells response very interesting because his perception of Police Brutality is the opposite to how others view it. Over the course of the Interview I found it very beneficale I was able to learn that contrary to popular belief not all police officers are bad in fact most of them in particular want this agent of change and wants to show that they are just like us human. However with the way things are looking most of society is against authorities they believe there is no level of trust between the two parties we are different and in this case being different is not what we need. In the words of Barack, ¨This is not just a black issue. It’s not just an Hispanic issue. This is an American issue that we should all care about, all fair- minded people should be concerned.¨ The problem with Police Brutality is that it is a frequent thing and with that being said instead of people complaining about Police Brutality we should all try to band together and find a way to change what has happened to our community. An important question that we all must think about is why? why does Police Brutality constantly take place amongst so many people? In my interview with Officer Mitchell he said it might be lack of training and there may be a need of background checks. In conclusion I think Police Brutality is sad, but we as a community must also try to figure out why is it happening and what measures can be taken to prevent it. If you would like to see my annotated bibliography please click this link thank you for reading. Annotated Bibliography: https://docs.google.com/document/d/13wTzYcJCdMGtSsozTe1VAUYwjLW3z1r577zruis1Vrw/edit?usp=sharing

I love the fact that you picked this topic. I feel like you explained your topic in an intriguing way, but still informative. As a young black male yourself this is something that is great to know for future purposes. For your agent of change, you can maybe write a poem explaining what it feels like to go police brutality. Great job Jasir!

I really hope you go through with your agent of change, it will be eye opening and I enjoyed your statistics and research on police brutality.

^ I agree with Gia. A short film would be so cool! But this is a great topic because it's something everyone knows and you should bring the information a step further.

I read your essay during the first blog post and you continually impress me with your essays. I love how you choose images that complete your post and how your annotated bibliography is very informative.

Your interview shows that police brutality isn't from racism and I think it answer a couple of questions in my mind. I like how this post catches my attention and make me want to know more. I think that more questions could as been asked so the answers you received were more specific unless they can't give you a really specific answer because it's a rule.

Questions or comments about the original research The post showed how you were intrigued in your situation but, also showed how you were taking in the information and showing the readers. I feel as though you could find out more about more situations about police brutality and maybe make a short film about it.