Posted by Delesha Jackson in American Government - Laufenberg on Friday, January 20, 2012 at 5:45 am
De'Lesha Jackson and Jasmine Gladden "freedom of speech"

Personally I chose this topic because it was honestly the first thing that came to mind. Normally it would take me awhile to figure out what exactly I wanted to use as my topic but it was the first article of the constitution so it was sort of right there. The thing I enjoyed about this project was the fact that I didn't have to be in the video and it was fun to hear what people had to say about why freedom of speech was important to them. Although it was difficult incorporating the C-SPAN video because they didn't really connect with what we were saying but we made it work. The quotes that we used were really interesting to because not only were they true but they sort of gave me a different perspective to look at. I think if we had more views and interviewed more people the video would have been better because there would have been a better range.

Me and my partner didn't really run into problems once we got passed how to convert our video to post it and how to download the C-SPAN video it was smooth sailing. Overall, the project went pretty well I haven o complaints but like I said if I had to do it over I would have interviewed more people and maybe make the final more interesting to look at with music maybe. I learned that not everyone values their freedom of speech and not everyone knows why it's important to them it just kind of is. 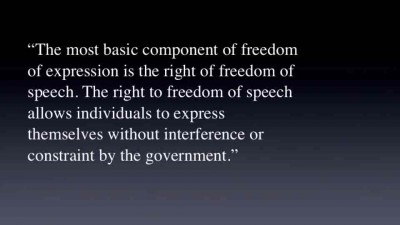