Posted by Salvatori Camarote in CTE Senior Capstone · Walker-Roberts/Ugworji · Wed on Thursday, May 28, 2020 at 7:58 pm

The project I worked on ended up being a pilot/short version of the documentary I originally planned. Its an overview of what this school year has been for SLA (some info/details on Ben Franklin as well) and the circumstances we had to adapt to for this year. Due to circumstances I only conducted 1 interview, so I was unable to get a diverse group of perspectives and lots of stories will remained unshared. I learned a lot about managing a project this big, and understand what preparations I need to make for something like this in the future and that I would need to be more organized and adaptable. I do believe the final product is good, but I do believe this could've been much greater. I also plan on uploading a public drive in the near future with all the footage I captured. 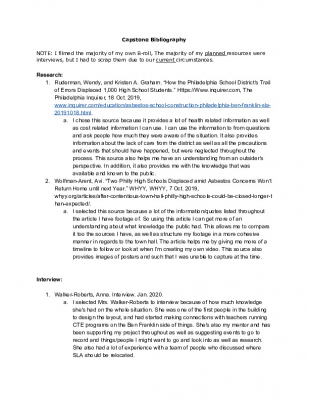