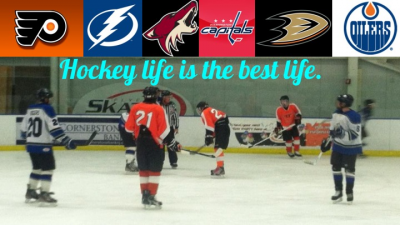 Hello, I am up here to tell you guys why my slide looks the way it does. The reason it looks like this is because in my opinion, Hockey life is the best life. My life is basically all hockey, everything that i do is based around hockey. This big picture is a picture of my line and I. We basically became a family because I am around them so much. Everything that I do revolves around my hockey schedule. This basically shows that you have to be dedicated to play a sport. These pictures along the top are the logos of my favorite teams in order from left to right. The reason these pictures are on my slide are because they are the reason that i started playing hockey and some of my favorite players and my inspirations are on these teams. 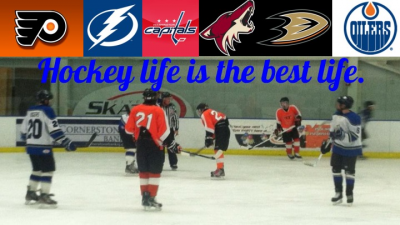 While listening to the critic toward myself and the rest of my classmates, I learned a lot about design. While researching before my presentation, I read about contrast and that's really it, Therefore I based my slide off of that. After listening to everyone elses, I heard a lot about the rule of thirds, And i heard about dividing your slide up to have the quote on one side and the picture on the other. Instead of using these, I just took the little amount of critic that i got and put it into action. Many of my classmates told me that they did not like the color of my quote. They said that the color, which was a light blue, did not match with anything in the slide. So that's what I did, I changed the color to a blue that matches the color of the Tampa bay logo, the color of the opposite teams jersey, and the Oilers logo. I was set up for failure because I did not know what the script was about. Instead of writing about the design factors, I wrote about what the slide meant to me. This caused me to stress and I researched last second and thought up a script. I did not submit the script that I said in front of the class though.

I think that changing the dark blue text to a bright cyan text was a good move. I wonder what other colors would look nice with that text?

I notice that in changing your first slide to your second slide your changed the text color, which makes the text fit in with the background yet at the same time stand out, which I believe is what you are going for. I wonder if you would be able to separate the two logos with the black background with the Oilers logo I think it would look better. What you tried a different font I think that would be intersting

I kind of like your first slide better, because the words "Hockey life is the best life" color are really bright and i think the color is match with the background, but you should take out some of the picture, and make like 2 of your favorite team on it bigger , and ignore other of them, it will be great !

I noticed that you changed the color of your text. It made the slide more presentable and eye catching. Also you changed the size of the font which I feel is more helpful to read.