For our quarter 4 Benchmark we had to chose an issue today that we are passionate about and we had to research and blog about the topic in order to raise awareness. For my last project of the year in English class I chose to study the effects of poverty on a student's academic success and the relationship between education, unemployment and homelessness. I wanted to learn more about this issue because I do not feel that I know enough about people who are suffering from poverty because of my middle-class upbringing. I also know how important it is for everybody to receive an education so they can do well in life. A student’s social class should not have an effect on the quality of their education, because everyone needs to be educated and literate to survive later on. People need to know about this devastating issue and do something about it even if they are not affected by it!

According to the National Center for Children in Poverty (NCCP), “15 billion children in the United States (21% of all children) live in families with incomes below the federal poverty level.” This means that only three in four American adolescents graduate from high school. This is troubling because not graduating raises the chance of living in poverty by 49%. This causes 1 in 50 US kids to be homeless. Another reason for homelessness is that 44.9% of the kids that are now homeless had parents that were alcoholics. When children are homeless it makes them more vulnerable to getting sick and this how “more than 1 in 7 homeless children have moderate to severe health conditions, such as asthma” (CNN). This leads to 13 kids dying on the street everyday. How can people still live with the fact that 1.16 million homeless children will not graduate high school? Poverty has a negative impact on schools and makes it harder to have decent facilities and quality teachers. Schools in low income areas are just not prepared to take on all the challenges in giving poor students an education. “Pic 1” shows how important an education is to get employed and demonstrates that we need to make sure that all students get at least a high school diploma.

Pic 1: This graph shows the unemployment by level of education. It tell us that if someone does not earn a high school diploma they will have a harder time getting a job.

There are organizations in place to help. For example, the Pennsylvania's Education for Children and Youth Experiencing Homelessness Program. Their main goal “is to make sure homeless youth have access to appropriate education while removing barriers that homeless children face.” There are also many homeless shelters around the country but the problem is that a lot of people do not realize that they qualify as homeless and when they do they are too scared to join a homeless shelter, as explained in this video. People need to start standing up for kids in their communities and end the vicious cycle of youth homelessness.

At its roots, this issue can be traced back to the failure of public education to reach children in low-income neighborhoods in America. The student poverty issue is not as big as a problem at Science Leadership Academy (the school that I attend) because it is a magnet high school and it has a large variety of people. However there are still students who suffer from poverty and our school is affected by the budget cuts of the Philadelphia School District. This is why I question if every child will ever receive an adequate education and I wonder if there will come a time where all schools are more or less equal.

Pic 2: This pie chart shows the distribution of age when it comes to homeless people. It tells us that more than half the homeless children are below the age of 6. 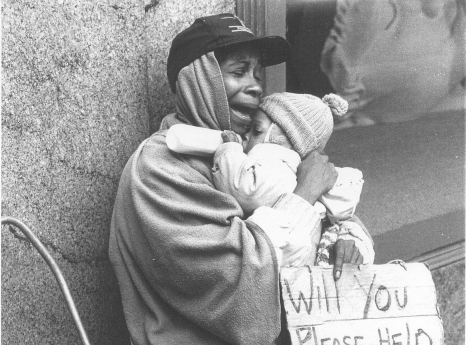 Pic 3 : This picture shows the effect of poverty on people.

Here is a link to my Biobliography.

Hi Julian. This is an interesting and important subject that is not talked about as much as it should be. Thank you for sharing your research and personal interest in the subject matter. I especially enjoyed the graphs that you shared. I look forward to reading your additional research on this matter. Nice work!

I notice that you have many links to sources and this is good because it shows you did lots of research. Good job I wonder if orphanages take any part in this controversial topic. What if you go more into depth of why this topic matters to you?