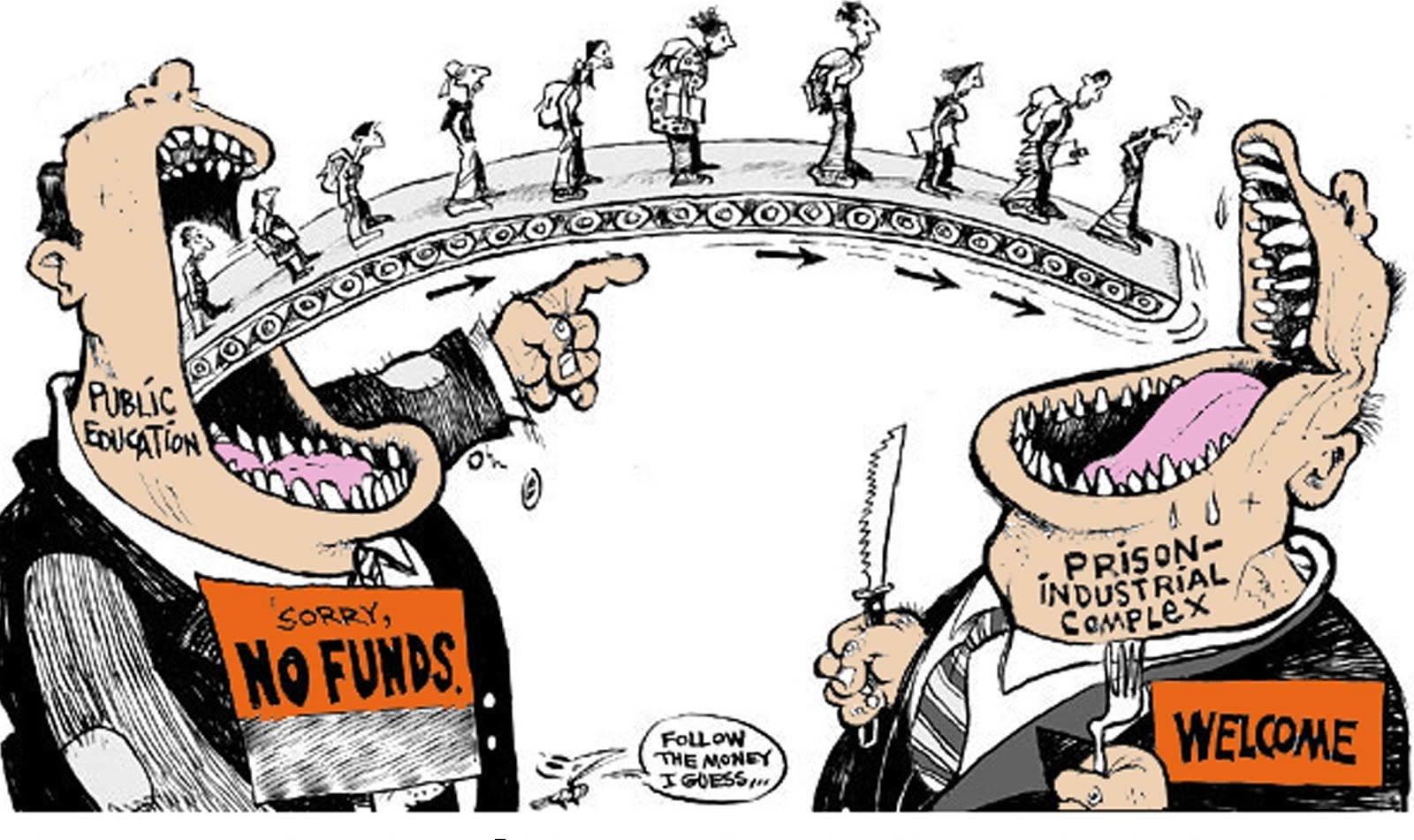 Hey my name is Jesse Stevens and I am currently a freshman at Science Leadership Academy in Philly. For English 1 me and the rest of my peers were asked to choose an issue in the world that we cared about and create three blog post on the matter. The issue that I choose to type about is the School to prison pipeline that affecting students everywhere.This pipeline ruins lives and breaks families and needs to be stopped. In this first blog I would like to just bring this subject to your attention and draw you in so that not only I'm the one making a change but so that you the reader can too.

2 new prisons worth 400 million dollars. Now what happened to the schools and getting an education?Just like the title states this blog and the many that will come after will be about students who are pushed out of school and are being thrusted into prison as a result of the school districts negligence. Students cannot compete against the high risk testing, zero tolerance and are expelled from their schools or even drop out because of these harsh facts. Also the fact that schools are getting less funding for extra programs such as music or art and less funding for guidance counselors. Things that schools really need so that students can be successful.

This issue has great significance because It can and is happening to us.Students educations are being halted by all of the problems that the school districts are having. Since student are not being properly educated and getting kicked out of schools the future of this world is being destroyed since the kids are being sent through the criminal justice system and now have a record.With the record they can’t get a good job, get into the college they want and just overall just have a tougher life than people without a record. to add on once they get a record and can’t do any of the things I previously stated they are more likely when they get out of jail just to go right back for similar reasons that they got locked up for in the first place. Right now to me it feels like a power struggle between  Education v.s Incarceration. As you can see the significance of this issue is huge as it can dictate our future and should impact the way you think about the school district and what needs to be done.

Many students get suspended but here are a few specific statistics that explain my point further.Statistics from the American Civil Liberties Union show that:

These statistics are up to date and are very shocking. Not only are healthy kids are being suspended and getting put through the criminal justice system but disabled kids have a higher suspension rate! How come disabled kids are getting suspended more? They can’t help some of the things they do but thanks to certain school policies they don’t even get a chance. Beside the fact that there are more African-Americans and Latinos(so much for equality) being suspended but more importantly the ones that need a little more help in school are just getting kicked out and pushed towards the streets and eventually prison.We have to stop this but for that to happen we need to know more.Stay tune for my next two blog post so we can figure out how to break the school to prison pipeline and help students all over the world. Lets do this together. You the reader can now also be an Agent of change in your own way by getting more people to know about this.See you later!

Here is a link to my annotated bibliography

This blog was really interesting. I think that the game was really important and helped explain the blog in the view of a normal kid.

You used good statistics and made a good point. It would be intresting to see what the reason for this is. I would look into the reasons they are expelled. I know a teacher at Germantown High who was beaten up by his student, should the have been suspended. Does the student even care about school, if he would do this. If a student is caught with drugs on school property should he be banned and never come back? Then when you look at the racial statistics , what is the true problem?Is it rascism in the school district or poor school.

I really enjoyed reading your blog. It was very detailed and well written. I also loved how it ended by adding to the point of making the readers an Agent of Change as well.

Great blog. I like how you added statistics and had very detailed information. Your picture goes along perfectly with the blog too.

The blog gives you a lot to think about regarding the school systems. A few grammar errors but overall a great blog.