Outgoing, happy, and adventurous. Those are the things that summarize my personality. I asked a lot of my friends to tell me who they think I am. A lot of them told me I carry myself confidently and that I never shy away from a challenge. I think the ones I decided to chose for myself hold a lot of meaning and describe me pretty well. I know these characteristics will help me throughout my time in this course as well.

Though meeting new people is scary for everyone, I always get a twinge of excitement when I'm able to introduce myself to someone. I have been oddly outgoing since I was little. Being an extrovert helps a lot in the workplace as well as in a social setting. If I were to work with an unfamiliar face, instead of being hesitant and shy I would try and get to know the person.

Adventurous was the first adjective that came to mind when I read overview for this assignment. I would say that I am very admiringly adventurous and Im not afraid to try new things. This trait would also be a helpful tool in a working environment. Joining this program is trying something new and the simple willingness of being excited to try new things is why I will hopefully succeed during Digital Video.

Lastly, I would describe myself as immensely innovative. I love making little projects with my sister on my own time. As I said in recent paragraphs, I believe that having innovative tendencies will also help me improve in all aspects especially in school and in CTE. Being innovative and having your own unique thoughts and opinions is one of the most valuable things.

In conclusion, being an outgoing person in the workplace, makes it easy for people to come to me if they ever need help. Because I am adventurous, I am not afraid to try new things. Having innovative tendencies is extremely valuable because I can create my own opinion on topics and come up with unique ideas. These three strengths will help me improve and succeed in CTE Digital Video. B

My element is Antimony with the atomic number of 55. Antimony is a rough semi-metal, and in its metallic form, Antimony appears silvery. It is used in the electronics industry and is used in batteries. Antimony not only has been used in batteries and bullets, but is also found to be used in Egyptian mascara and eyeliner. Antimony was commonly used during Medieval times as well. It was used medicinally as a laxative pill and was said to have been in the medicine that killed Mozart.

I traced music notes floating around what is supposed to be Mozart’s grave. I decided to design my piece like this because many people lost their lives to Antimony. I drew music notes around the grave to represent one of the more famous lives it took.

After I had figured out what I wanted my design to look like, I traced it on scratch paper. I then traced it onto the foam paper and made several prints until I was satisfied with them. Finally, I matted the images.

If I were to do this project over again, I would probably change my initial design. I liked the simplicity of my image, but I would definitely make it more complex next time around. My favorite part of this assignment was researching my element. I enjoyed learning about my element. I had no idea what Antimony was, so learning about it and how far the element traced back was pretty interesting.

Posted by Emma April in Art - Freshman · Hull · d1 Band on Thursday, April 26, 2018 at 10:12 am
​1) Negative space is the area around the pieces of an image to focus on main points.
2) I started tracing the outline of my image with the razor blade. I then pressed down harder and started cutting. After I was finished I traced all of the pieces onto my orange paper and cut them out. Finally, I pasted my product on my white paper and I found my negative space.
3) It helps an artist to see negative space because it helps focus on the main parts of the object/image.
4) Yes because it allows u to view it in a different way.
Posted by Emma April in Technology - Freshman · Hull · d2 Band on Friday, December 8, 2017 at 12:51 pm
From the criticism I received, I learned that my slide was too buisy. The background of my slide was too stretched, and the quote was spread out everywhere. The number 10 on the soccer player's sleeve was too close to the quote and seemed irrelevant in my slide. The font of my quote did not pop and the contrast of the quote on the silhouette was too distracting.
I made my new slide more simple. I changed my quote to something that described me in fewer words. I placed my new quote underneath the soccer player. The dividing line in my new background is pleasing to the viewers. I lined up the beginning of my quote to the soccer players cleats and the end of the quote to the goalpost. I chose white as the color of the font to contrast with the green. I used Architect's daughter as my font because it makes it appear like the soccer player wrote it.
I modeled my slide after Presentation Zen. I used the rule of thirds, the soccer player's legs, the soccer ball, and my quote. The soccer player also bleeds off of the page making the slide look as though there is more to the slide. There is a lot of negative space which gives my slide a nice touch. In conclusion, I took the criticism I was given and executed a better slide.
Posted by Emma April on Wednesday, November 22, 2017 at 8:59 pm 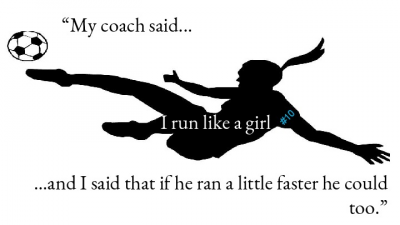 Hi, I’m Emma, and I chose to model my slide after Presentation Zen. I used a soccer player as my background because I am very passionate about soccer. I also included my soccer number… #10 and placed that on the girl’s left sleeve in a sky blue hue to highlight my identity because that is my number. Presentation Zen states that enlarging your text grabs the attention of your viewers, so I made sure that my text was big and very noticeable. I also included a quote from one of my favorite soccer players, Mia Hamm. This quote motivates me to work hard in everything that I do. This quote played a huge role in my sister’s life as well. As many of you may know there was a Women’s March that took place last year on January 23. My sister used this quote on her sign and many people took pictures of it and she ended up going viral. This quote means a lot to me because it contradicts the idea that men are better athletes. I incorporated the rule of thirds and contrast in my slide. I used contrast with the color of number but also the color of the text “I run like a girl”, highlighting that part of the quote makes it mine. The colors I used in my design work very well together: black and blue are cool colors which pop against the white background.

Posted by Emma April in Technology - Freshman · Hull · d2 Band on Sunday, October 15, 2017 at 11:01 pm
A)
Wireless Devices
-Most of the wireless devices are either iPhones or Laptops. Everyone in my family owns an iPhone and a computer (but the computer is mainly used just for work purposes). We also have printers hooked up to the internet as well as a xbox and a TV.
Wired Devices
-The wired devices that are connected to my network are, TVs and Desktop computers.
B)
I had no idea that my router connected to all of my electronic devices, even my wireless ones. It was interesting to learn about what kind of cable we had (coaxile), what it looked like, and what it connected to.
C)
I would tell them that they need to know what kind of cable they have. If they don't know, I would tell them to check and see because if they have a strong cable then they won't necessarily have any major issues with their home network.